The Wilton Rose: A Variation 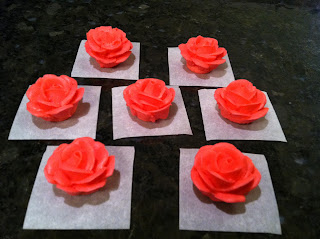 I don't think there's an icing flower that has more online tutorials than The Wilton Rose (including this one on the Wilton site). So, my goal isn't to provide the world with yet another one, but rather to show you a small trick I figured out for making a better looking Wilton Rose. Every time I attempted it, I'd wind up with a squashy, melted puddle of icing, no matter what temperature or consistency I was working with. Case in point: 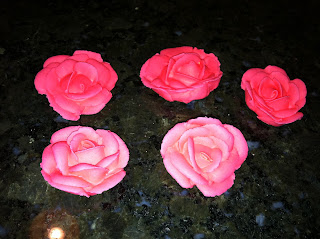 I roll my own eyes. They look like wads of chewed-up, stepped-on gum; all wrong! And I swear, I followed those directions to the letter, both on my own and in class. It wasn't until I figured out how to make royal icing pine cones that I came up with the idea of piping the base, letting it dry, and then piping the petals. Here's the set-up: 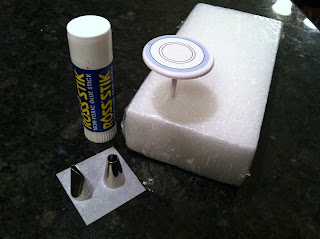 That's a Styrofoam brick, which makes a great third hand when you're hard at work. There's a rose nail stuck into it; the rose nail has a decal on it that provides a guide for how large to pipe the base. To the left are a 2" by 2" piece of parchment paper (you'll need one for each rose), a glue stick (for temporarily attaching the paper to the rose nail, and the medium round tip #12 and the rose petal tip #104. Start by putting a dab from the glue stick on the nail, and attaching a parchment paper square to it: Load two piping bags with royal icing in whatever color the roses are going to be, or one bag with the round tip and a coupler. Start by piping the base, which is basically a Hershey's Kiss (the official Wilton tutorial linked to earlier will provide you with more complete guidelines regarding angle and pressure): 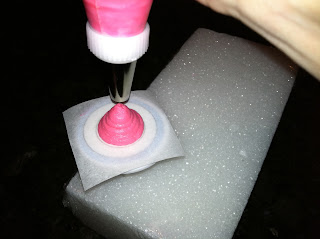 Slide the paper with the piped base on it gently off the nail and set it aside; tug it gently to release it from the glue. Allow the base to dry about 20 minutes; it will crust over sufficiently. Here are a variety of bases; the best one is in the middle, but remember: they don't need to be perfect… 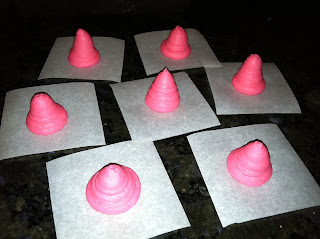 …because they'll be covered with petals. The center petal is spiraled around the tip of the base, using the #104 tip: 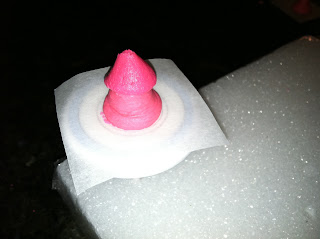 Three overlapping petals are then piped around: 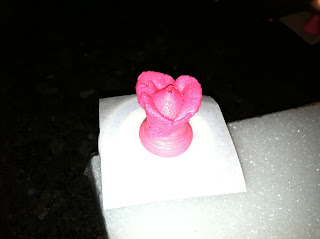 And then five petals: 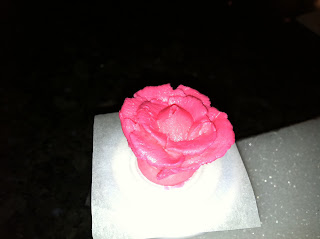 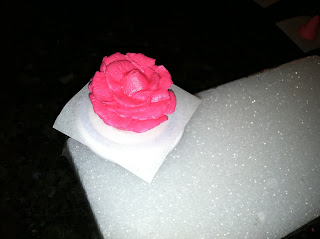 The difference between these roses and my earlier efforts is pretty dramatic! Incidentally, the icing I used for both attempts at The Wilton Rose came from the same batch, which I made following this recipe. I recommend it wholeheartedly; not only does it work well for piping flowers (and pine cones), I actually think it tastes pretty good! 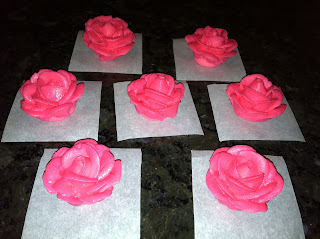