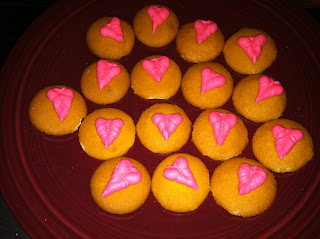 Ever since I heard of tip #353 I've wanted to get my hands on one. It's not a tip I've ever run across at cake decorating stores; Michael's definitely doesn't have it. I suppose I could have gone straight to eBay, but yesterday I found one at Sugar N Spice in Daly City, CA. What got me all fired up about tip #353 was this book, "Wilton: The Uses of the Most Popular Decorating Tips," originally published in 1986: 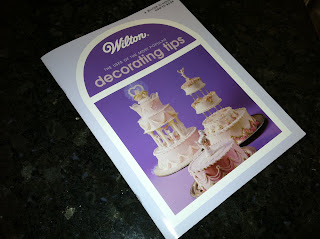 When I found it at Michael's I was amazed they had something so old school lying around, considering the turnover of merchandise at that place. Then I turned the book over… 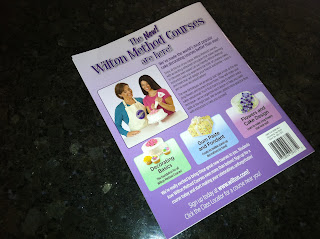 …and discovered it's been reprinted. The graphic design is like night and day between the front and back covers! Anyway, it's an enchanting book, if you're into seeing pictures of cakes decorated before fondant became ubiquitous. I love everything about it; the writing style, the color palette, and especially the examples of piping you can do with all the various tips. In particular the page about "special use tips" caught my eye: 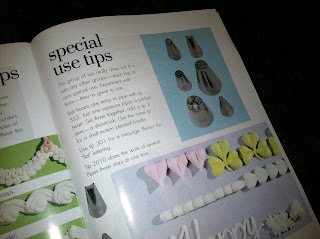 I already owned all the tips featured on this page, with the exception of this one, tip #353: 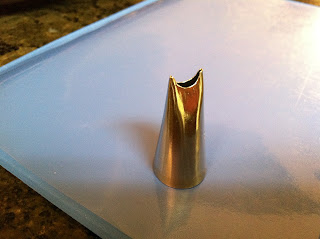 Normally I'm not a huge fan of tips that only do one thing, but a tip that makes three-dimensional hearts has the potential to be pressed into service constantly! Not only that, but three piped hearts can be made into a shamrock, along with a stem from a small, round tip #2. These hearts also make a great border. It took me a number of tries to figure out the angle and pressure for the piping bag. I think things might have gone smoother with a thinner consistency icing, but the thick royal icing I had on hand for class worked out OK. I usually have Nilla Wafers on hand; they're great as a base for all sorts of piped flowers, including the shaggy mums on the cake at the top of the chocolate fondant from scratch post. Nilla Wafers made a great practice surface for figuring out how to pipe hearts. It's very important to keep the tip clean; the end of this tip has a deep crescent-shaped cut and excess icing always seemed to be getting left behind in it like this: 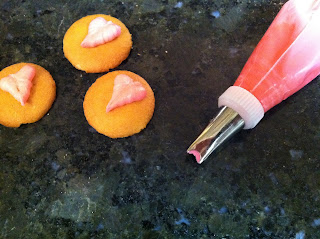 Keep a damp cloth handy and you'll be able to wipe the tip clean for each new heart. I keep a box of unscented baby wipes around for this purpose. To pipe hearts with the tip #353, hold the bag a little higher than a 45 degree angle to the surface and with one of the tips of the crescent touching the surface: 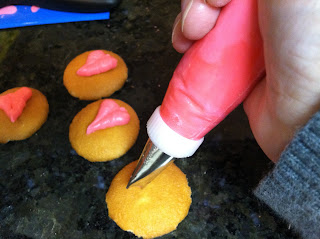 Squeeze hard and the upper bulbous curves of the heart will form out both sides of the crescent. Keep squeezing, but decrease the pressure as you move the tip along for about 3/4". 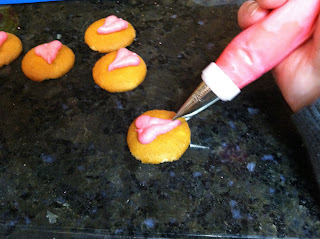 Stop squeezing, and pull the tip away when you reach the end. You can use your fingers to gently tap out any imperfections in the heart, and also use one of the points of the tip's crescents shape to gently define the divot between the two upper bulbs of the heart. 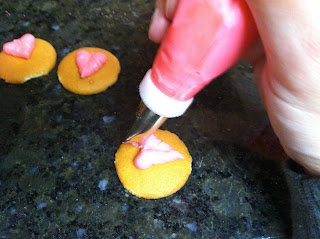 Here are three of my favorites; I'm looking forward to trying this again with a thinner frosting, because I think the result might be smoother. I'm glad I found this tip in time for Valentine's Day! 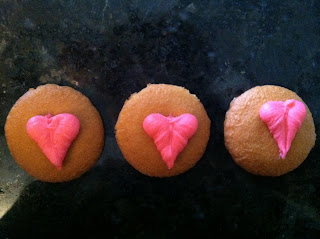 Posted by Denise Delaney at 2:03 PM