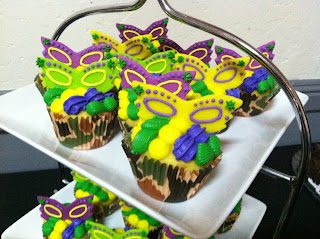 Today about 200 people gathered together to remember the life of Evan Saunders, who had to leave us way too soon. Evan loved everything to do with New Orleans, and could wear a mask like no one I've ever known: 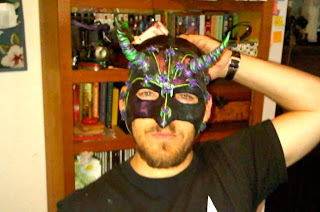 Another case in point, along with his son Aidan and wife Lisa, who designed and made all their costumes: 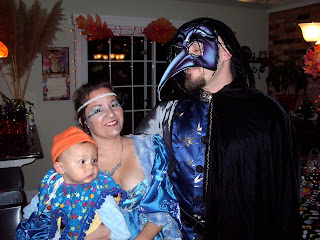 I wanted to pay tribute to Evan's love of partying, costumes and desserts (he was always among the first in line to sample the goodies I brought to the theater to keep the cast and crew going). I thought that cupcakes bearing some sort of Mardi Gras iconography would do the job. I started with my usual fondant set-up; powdered sugar, a rolling pin fitted with purple rings, homemade fondant in purple, green and gold, a small spatula for helping to remove cut pieces from the cutter, which in this case is a tiny Mardi Gras mask. To the right is one of those multi-purpose plastic scrapers; you can find these at almost any kitchen supply store. They're great for removing fondant from the work surface: 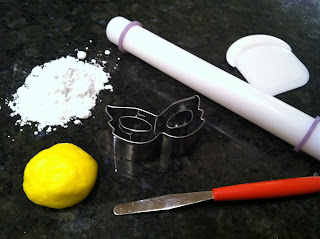 After powdering the work surface, I cut out the masks, one for each cupcake: 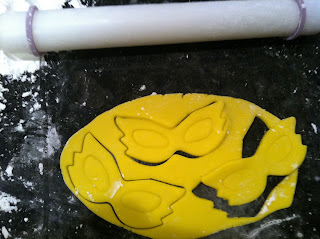 Then I laid them out on a piece of parchment paper spread over a baking rack to dry: 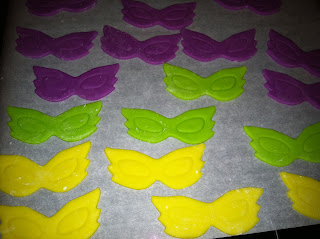 I'd baked lemon cupcakes the night before in camouflage cups. When he wasn't in costume, Evan was almost always clad in camouflage pants; I thought the cupcakes should reflect that by having camo on their lower halves: 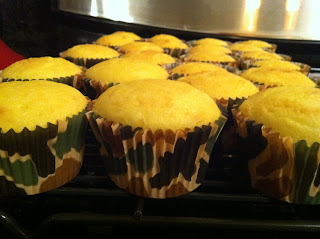 While the fondant masks dried, I piped rows of different shaped "beads" across the cupcakes surfaces. I used lemon frosting colored even more yellow for this row, piped with a round #12 tip; the bag is held perpendicular to the cake, and as a bead is piped the tip remains buried in the icing. When it's pulled out any peaks that remain can be tapped out with a powdered sugar-covered fingertip: 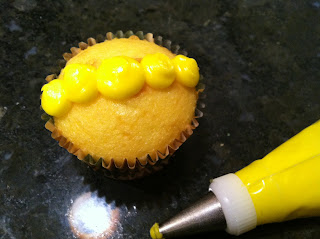 Between rows of beads I put the cupcakes in the fridge to firm up the icing a bit; I didn't want one row smearing into its neighbor. This row of "beads" was piped using purple-colored vanilla frosting. I love this tip; it's an Ateco #105. It's almost shaped like a little castle turret, and pipes squarish grooves; very different from all the soft round edges you see in piping: 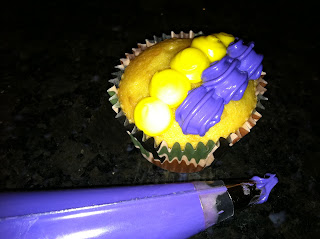 Then I piped the green beads (made from lemon frosting colored green) with an Ateco #363 tip that has lots of tiny grooves: 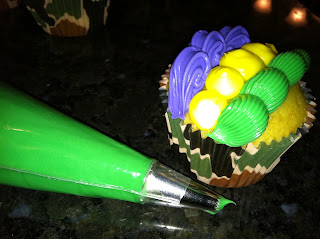 I finished by making duplicate rows wherever they'd fit: 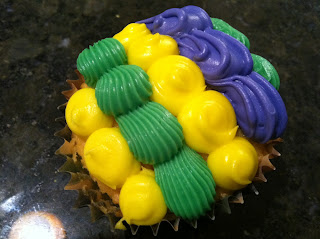 I let them chill in the fridge overnight: 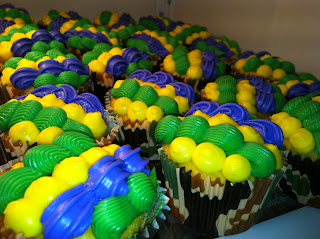 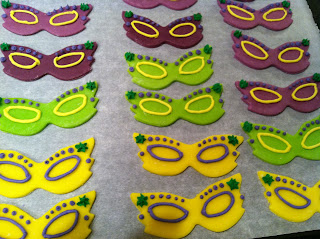 …and the next day I assembled them at the theater. Watching Evan's son Aidan inhale all the frosting off one of them answered my internal question, "Would Evan have liked these?". I'm pretty sure they were a hit. 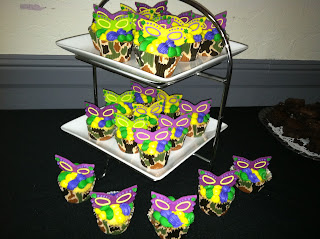