I know, I know; it's a bit late to be talking up Yule logs. The thing is, I bought one of Williams Sonoma's fabulous Stump de Noel Bundt pans at the end of the season when the price dropped and I've been dying to use it! There's no way I'm waiting almost a year to press this pan into service, so I'm giving it a test drive now. Yesterday I made meringue toadstools to "garnish" the stump, and today I'm taking piping bag in hand and trying to figure out how to make pine cones. 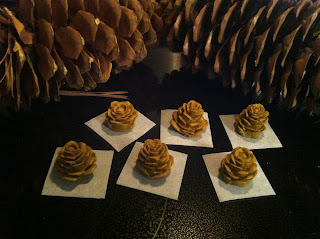 There are a lot of online tutorials for edible pine cones, but most of them rely on gum paste. In my humble opinion, gum paste isn't so much edible as it is non-poisonous. I'm pretty sure no one's died a horrible death from eating gum paste, but if I found out it's a routine occurrence I wouldn't be surprised. I ate a small amount recently (a 50/50 blend of gum paste and my fondant from scratch), and my first reaction was, "Hmm, not bad. Tastes like fondant. A little slippery." And then I proceeded to endeavor to swallow it. I felt like I was being waterboarded (from what I've read). My gag reflex went into the same mode as when I swallow a piece of gum and make every effort to valiantly choke it back up. So, long story short, I really wanted to make my pine cones as edible as possible, while hopefully making them slightly realistic. I'm hoping in the presence of the meringue toadstools the persistence of imagination will kick in and folks will figure out what they're supposed to be.

First, I pulled together some pine cones for inspiration. These are sugar pine cones, straight from the forest floor of Calaveras County, CA. Note, they are not dark brown; they are more of a peanut butter color. I mixed up about a cup of royal icing and brown paste food coloring, which made half a dozen cones with plenty left over. 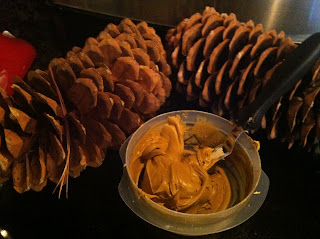 I put a tiny dab from a glue stick on a rose nail. Then I stuck a 2" by 2" square of parchment paper to it (I hear you can buy these pre-cut; please resist and make your own). I fitted a piping bag with a coupler (so I could change tips) and a medium round Wilton tip #12, and filled the bag with icing. 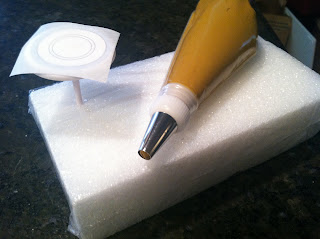 I piped a column of icing as high as I dared (just over an inch); starting with the tip touching the center of the nail and squeezing and drawing the tip away at a 90 degree angle to the nail. 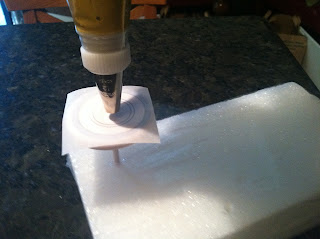 I made half a dozen of them, each on its own parchment square, and allowed them to dry for about 20 minutes; long enough to crust over. Any little peaks on top or other "issues" can be smoothed over with a fingertip before they dry hard; they can also be straightened up if they start to lean (like that one on the left, front row). 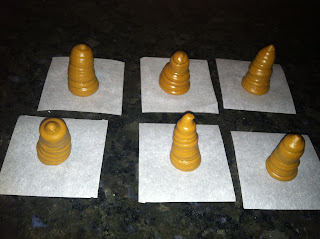 Then I switched the tip to the Wilton #101 (a small rose tip) and started piping petals. I figured, a rose has petals, and so does a pine cone; why not? I more or less followed the pattern suggested by the Wilton rose. I started with 4 petals, each overlapping the previous. The hand motion is like drawing a tiny upside-down "U." Here's the first petal: 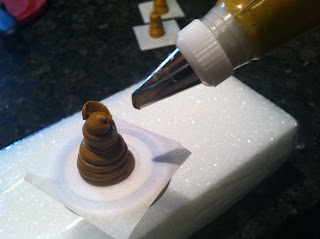 I held the bag at about the 1 o'clock position, if the column is at 12, with the wide end of the opening at the bottom and the narrow end aligned with the top of the column. I piped these 4 petals around the top, leaving the tip of the center column exposed. It had a small peak, which I rounded down with a fingertip. 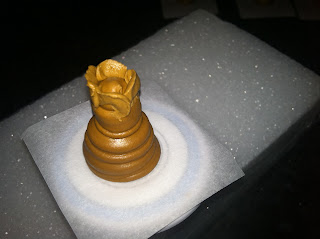 Then I piped another 5 petals, overlapping the base of the first 3 slightly (and overlapping each other). The trick to piping these petals is to rotate the nail counterclockwise while squeezing the bag and holding it more or less in place, other than a slight up-and-down motion to form each petal. The tip is angled out a little wider now; maybe at 2 o'clock in relation to the center column. 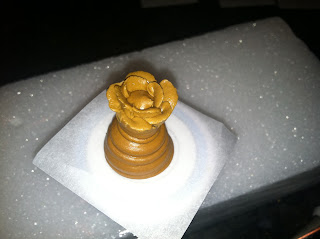 Then I switched to a larger rose tip, #104, and continued to pipe overlapping layers of petals, spiraling all the way down to the base. 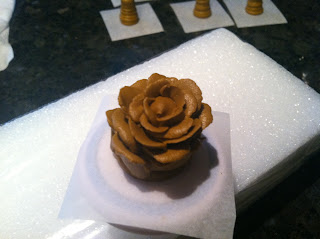 I'm not too worried about any raggedness at the base; real pine cones don't exactly have unblemished foundations, and these are going to be sunk into a brown, forgiving cake. When you're pleased with the outcome, give the parchment paper a gentle tug to break it loose from the dab from the glue stick, and slide the pine cone off the nail. Allow it to dry someplace away from moisture and direct heat. If you're not going to use the pine cones right away you can store them in a cardboard box (their preferred environment) for months. Feel free to give them a bit of a dusting with cocoa powder; that might enhance their dusty, forest-y feel. Of course, a dusting of powdered sugar could suggest snow. 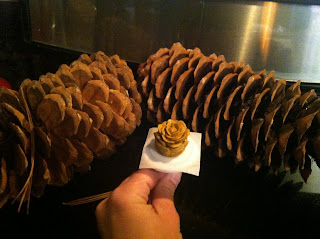 Can you think of other edible, forest-inspired things to add to a Yule log cake? I'd love to hear your ideas in the comments!
Posted by Denise Delaney at 4:15 PM