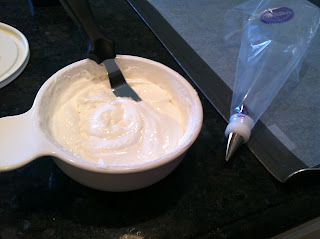 I have this bowl of royal icing left over from the snowflake cookies, and I thought of something to do with it: royal icing pieces. I'm making a birthday cake for a guy friend, and I wanted to do something other than lots of frosting flowers, drop strings, etc. The technique is simple: pipe designs onto waxed paper stuck to cookie sheets with tape. You can do this freehand, or slip a piece of paper with a design on it under the waxed paper and trace over it with the icing directly onto the waxed paper. Several hours later the icing will be dry and can be lifted carefully off with the aid of an offset spatula. The likelihood of breakage exists, so it's always important to make extras. It's possible to make extremely delicate, intricate pieces, but such was not the case with my first attempt at this technique. Perhaps because my icing was tired from sitting in the fridge or perhaps because I didn't have a #2 tip (#1 was really too tiny for what I had in mind and the #3 I used wound up being a bit too massive), the results look a bit like I tried to get creative with a travel-sized tube of toothpaste. Here's the first batch I made, featuring lots of random shapes: 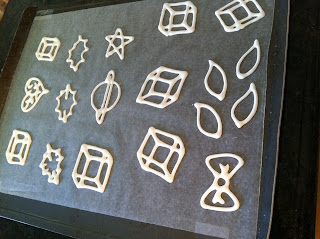 (note all the cubes; a nod of the head to my friend being into games that involve dice). Just as I was about to call it a night, I thought of a nice alternative to those hideous number candles; how about Roman numerals (33)? 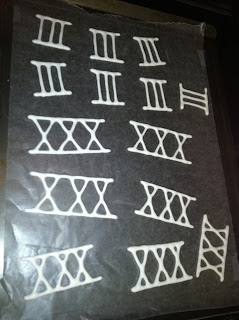 Incidentally, only one piece of all I made suffered any breakage, and I was able to repair it with a tiny dab of icing; the repair is to that little tail on the left: 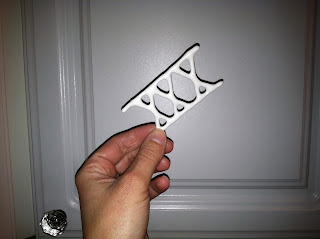 I'll post photos of the finished cake; hopefully it'll be yummy. I'm looking forward to crunching into those royal icing pieces; I actually really like how royal icing tastes! The Wilton book Decorating Cakes cracks me up with its rather unappetizing description of royal icing: "…you'll use it less for its taste than for its 'indestructible' quality." More for me!
Posted by Denise Delaney at 10:07 PM