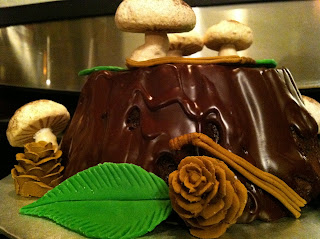 Finally, the time has come to bake the Stump de Noel cake and assemble the creations of the past few days, including the meringue toadstools, royal icing pine cones, and royal icing pine needles. Bear in mind, even though Williams Sonoma is no longer carrying this unusual cake pan, it can easily be found on eBay. I baked a box mix in it (Chocolate Fudge by Betty Crocker) for 60 minutes at 325 degrees. When I removed it from the oven I let it sit in the pan for 10 minutes, and then flipped it out onto a cake lifter, so the cooling rack wouldn't leave parallel lines on the top of the cake (which has a really cool pattern that looks like the stump's rings). The cake had developed an enormous crown, which would have probably caused the whole thing to crack. 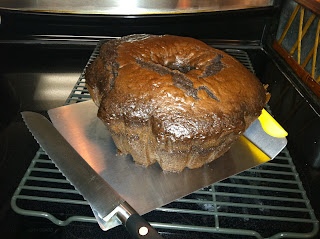 I sliced it off with a large serrated knife, and was blown away by the amount of steam that poured forth; seriously, it was like a tiny volcano on my stovetop: 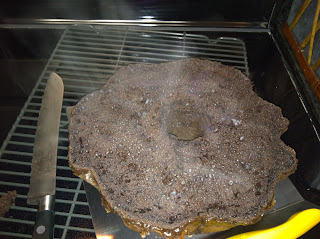 Here's the crown on the left, the cake on the right. That crown made for some mighty good snacking, let me tell you! 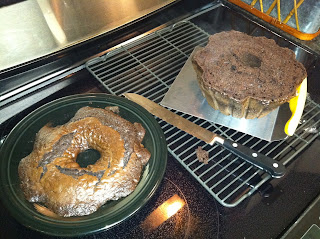 Here's what the cake looked like when I set it right-side up: 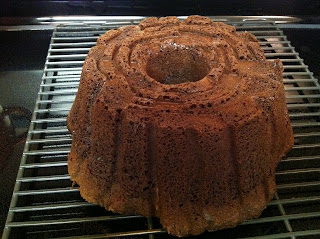 The pan came with a wonderful recipe for a glaze, which was simple and delicious. All you need is half a cup of heavy cream, and 4 ounces of chocolate: 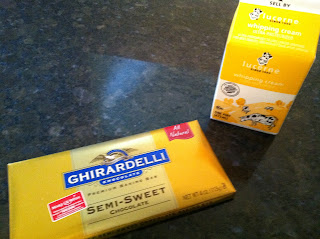 I figured a semi-sweet bar would be sufficient, as the cake is plenty sweet on its own. On a carving board, finely mince the bar of chocolate with a sharp, heavy knife: 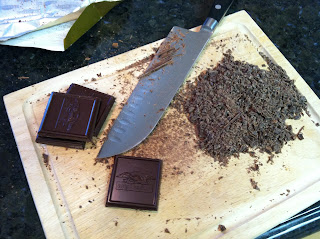 Put the minced chocolate in a bowl. 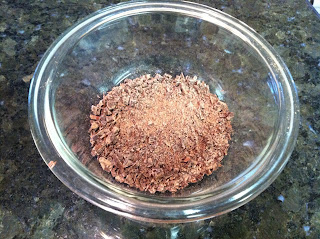 Pour half a cup of the heavy cream into a small saucepan, and simmer over medium heat. 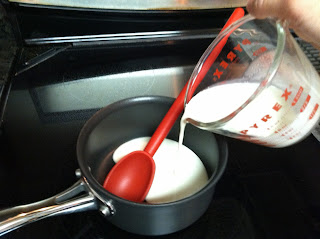 Pour over the minced chocolate and start stirring. It will go from this… 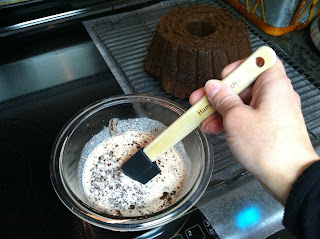 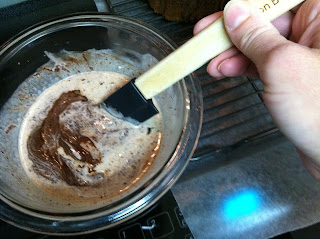 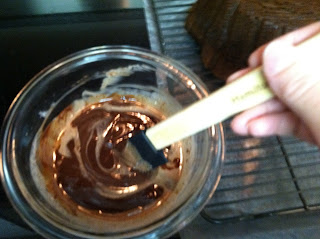 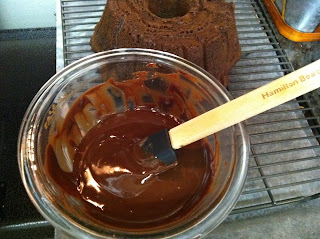 …in a matter of moments. Make sure there's a piece of waxed paper under the rack your cooled cake is on, and pour the glaze all over the cake: 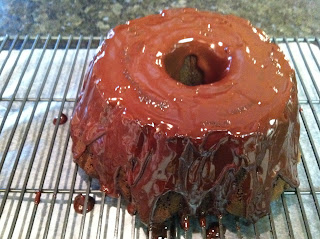 It was at about this point I realized I really needed to add a spot of color to this cake to keep it from being too brown and beige. I decided to try making some fondant leaves for the first time. Here's the set up: 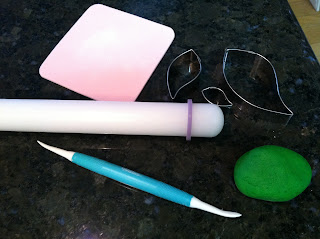 That's a 9" rolling pin with purple rings on it to keep the fondant at a consistent thickness, a set of leaf-shaped fondant cutters, a piece of thin, pink foam for forming fondant or gum paste shapes on, a double-ended veining tool (part of the Wilton Gum Paste Tool Set; a bargain at any price when you buy it using a 40% off coupon at Michael's), and a golf ball-sized piece of green fondant from scratch. I spread some powdered sugar on the work surface, and rolled out the fondant: 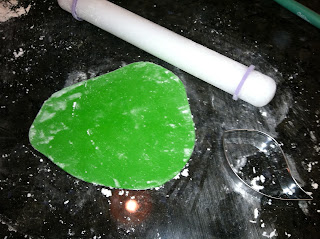 Remember, the powdered sugar more or less gets absorbed by the fondant; don't worry if there's an accumulation of it on the fondant's surface. Cut out a number of leaves… 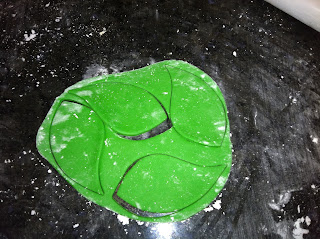 Keep re-rolling the scraps and cutting out more leaves until you're left with a situation like this; I'm always so thankful for those tiny cutters!: 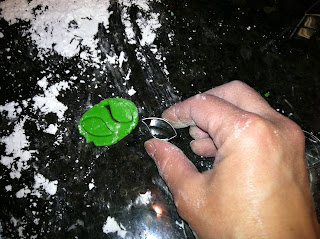 Then, use the veining tool to draw some details on the leaves, like a center line… 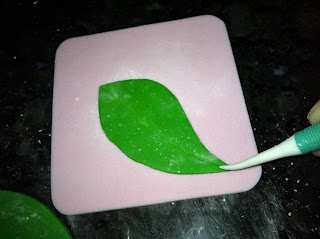 …and lines around the edges. Use the piece of thin foam as a work surface; it will have just the right amount of "give": 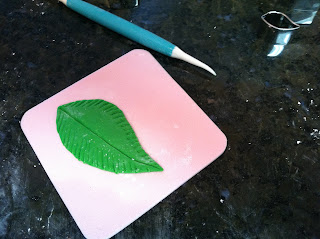 Put the leaves to dry on flower formers; that will give them a bit of curve: 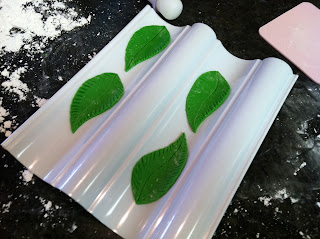 My leaves stuck a bit; I probably should have dusted the formers with powdered sugar or laid down a piece of plastic wrap first. I was able to pry them up with the tiny palette knife/spatula that came with the Gum Paste Tool Set. Finally, the cake was ready to assemble, which included a last-minute sprinkling of "snow"; powdered sugar in a dusting pouch: 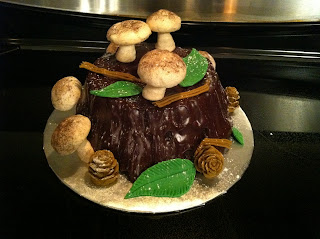 This cake was a real hit with the crowd it was served to; every bit of it was devoured, because every bit of it was edible! I'm so glad I didn't wait until next Christmas to try out this Yule log-inspired pan; it can definitely be tailored for any season of the year.
Posted by Denise Delaney at 11:13 PM