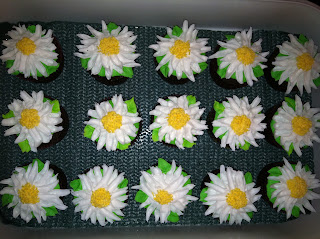 Girl Scouts of the United States of America is turning 100 years old this year; can you believe it?! Four generations of Delaney women have been Girl Scouts, so I feel like I need to post at least a few goodies that pay tribute to this tremendous organization.

The daisy is the official flower of GSUSA, because the founder's name was Juliette "Daisy" Gordon Low (the original J-Low). Here's how to pipe an easy daisy. Pull together a batch of cupcakes and icing. I really like Wilton White Decorator Icing; it tastes amazingly good and is easy to work with (the chocolate version is yummy, too). Color some of the icing yellow and some of it green; leave the rest white. I'm sorry I can't give you exact measurements, but as you can see the bulk of the flower is white and not much of it is yellow or green. If you're making a lot of cupcakes, you will probably want to pick up at least two cans of icing; I've never had a problem finding things to do with leftovers!

Prepare three icing bags; one will need a coupler, two won't. Into the one that will, fit the coupler with a smallish rose tip; I used the Wilton #104. Fill that bag with green icing. 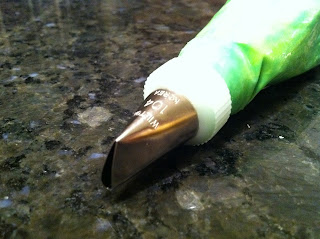 Drop a fluted tip (it's shaped like a smile; I used the Wilton #79) into a bag (coupler optional) and fill the bag with lots of white icing. Drop a multi-hole tip like the Wilton #233, used for piping grass, hair, fur, etc. into the third bag; fill that one with yellow icing. Pick up a cupcake in one hand and the green bag in the other, and pipe a ring around the perimeter; make sure the wide side of the rose tip is aligned with the outer edge of the cupcake. 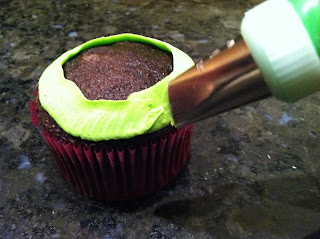 This ring and the one or more you pipe inside it will help give the white petals you're about to pipe some loft: 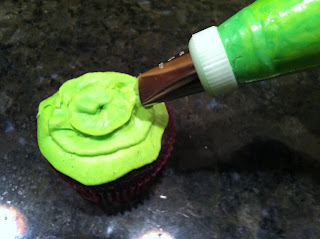 The petals are a bit tricky to describe and illustrate (made trickier by having a piping bag in one hand and camera in the other; incidentally, I'm holding the cupcakes in my left hand the whole time I'm piping and setting them down to take photos; I don't actually pipe with the cakes sitting on the counter like this). To make the petals, take the white bag in hand, and at a 90 degree angle to the top of the cake, squeeze a petal starting from almost the middle to the outer edge, pulling upward as you get to the edge. This action should get your petals to point upward. 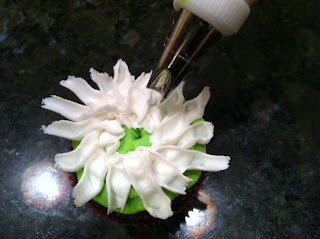 Add another layer of petals on top of this one; as many as you like. If the ends are looking ragged you can pinch them into more of a tapered point. Next, get your yellow bag with the multi-hole tip and pipe the center. Put the tip in the center, briefly squeeze, stop, and then pull back the bag; repeat a few times, maybe 5. 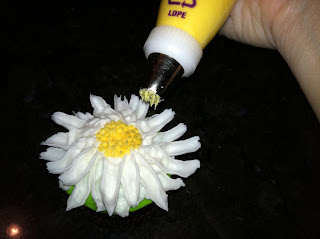 Finally, change the tip on the green bag from a rose tip to a small leaf tip; I used the Wilton #69. Tuck the tip under the petals, push it into the green icing base you piped earlier, and squeeze-and-pull out a few leaves around the perimeter. 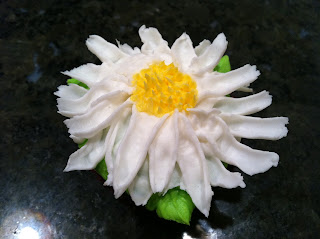 I'm interested to see and hear all about your Girl Scout-inspired treats! This is one of dozens of ways to pipe a daisy; I'll try to demonstrate another soon.
YIGS (Yours In Girl Scouting),
DD
Posted by Denise Delaney at 8:40 PM