I think I've produced more snowflakes in my kitchen than Mother Nature has in the entire state of California. Maybe I need to give her my recipe… 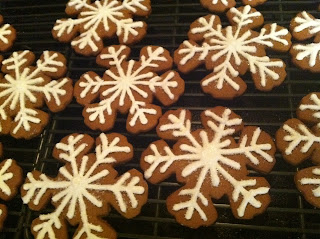 These were inspired by Martha Stewart's Gingerbread Snowflakes, but I used a much smaller cookie cutter (4 inches across, instead of 7; easier to dunk in a coffee cup), and the Merry Christmas Molasses Cookies recipe from Betty Crocker's Cooky Book. I made the royal icing using the recipe from Nut Tree Remembered: The Cookbook (the Nut Tree was a road stop in Vacaville, California, that closed in 1996; their highly decorated cookies were the stuff of legend). The royal icing recipe is simple: combine 3 room temperature egg whites with 1 pound of powdered sugar and 1/2 tsp. cream of tartar in the bowl of a stand mixer. Beat for 10 minutes. Keep it covered after beating; it dries quickly and hard. Store leftovers in the refrigerator. If I can't use this icing on something edible within a reasonable amount of time after making it, it gets downgraded to "craft supply"; it can be used to glue things like sugar eggs together.

Here's the process I used for decorating these cookies. First, I made a tiny dot at the center, using a Wilton #3 tip, for a guide: 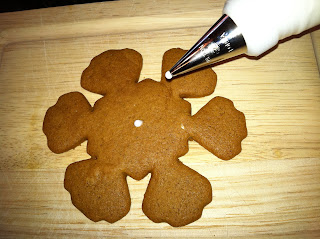 Then I piped all the "spokes" from the outer edges inward… 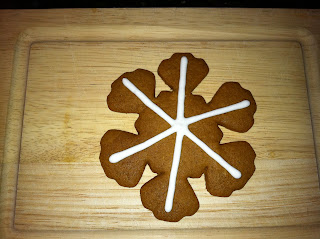 …and yet more shorter spokes… 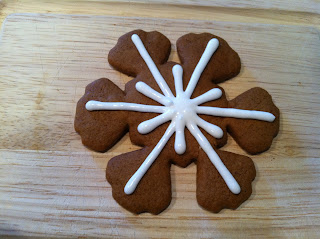 …and many short lines, working from the outer edges in toward the long spokes: 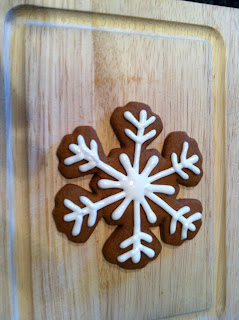 Finally, I sprinkled each cookie with white sanding sugar. The icing dries in about an hour. 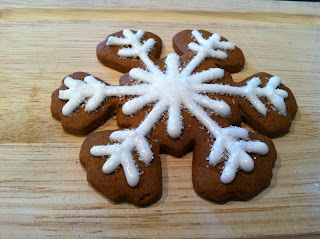 You'll probably have lots of leftover royal icing. It's very useful for performing reattachment surgery in the event your cookies suffer "loss of limb." I'll try to show you other uses for it soon…unless winter suddenly arrives in California, in which case I'll see you on the slopes!
Posted by Denise Delaney at 10:04 PM