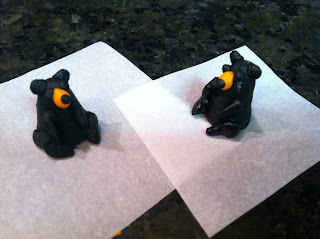 In 1954 the black bear was designated the official state animal of West Virginia, where it lives in all 55 counties. Piping black bears is similar to piping Teddy bears, but there are a few subtle differences. You'll need stiff consistency royal icing in black and brown (I used orange because it's what I had handy), parchment paper squares, a flower nail, a Styrofoam block to rest the nail in, a glue stick, round tips #12 and #2, oval tips #55 and #57, and a dusting pouch filled with a 50/50 mix of powdered sugar and cornstarch. Start by sticking a parchment square to the flower nail with a dab from the glue stick. 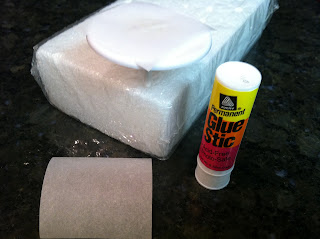 Attach the #12 tip to the bag of black icing. Hold it just above and at a right angle to the surface, squeeze until the icing covers an area about 1/2" across, then move the tip upwards while continuing to pipe steadily. After about 1", stop pressure and pull the tip away. 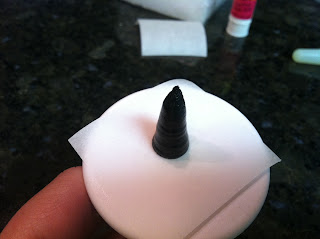 Touch a fingertip to the dusting pouch and tap the peak to round it. 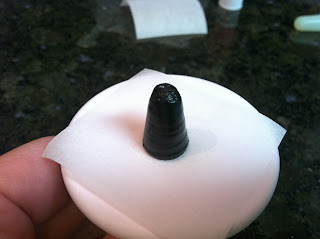 Switch to the #57 tip and pipe the legs. Hold the tip against the base of the body and pipe a short squiggle, ending in an upturned foot. 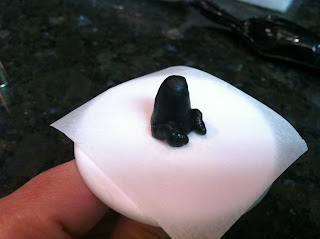 Switch to the #55 tip and pipe the arms. They should hang down, as bears' arms tend to do when they're standing there, staring hungrily at you. 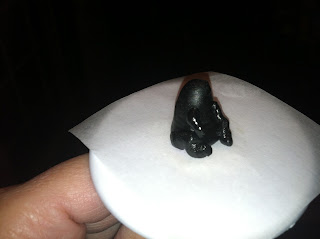 Use the #55 tip to pipe the ears; two short, quick dabs to the head. Tap the peaks to round them with a dusted fingertip, if need be. 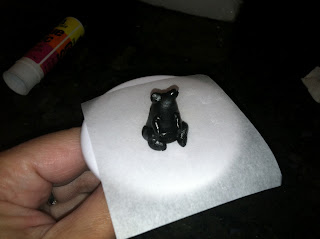 Wash out the #57 tip and attach it to the brown (or orange) icing bag. Pipe a small oblong mound for the muzzle. 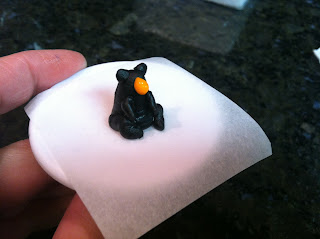 Switch the black bag to the #2 tip and pipe a tiny dot for the nose and two tiny dots for the eyes. 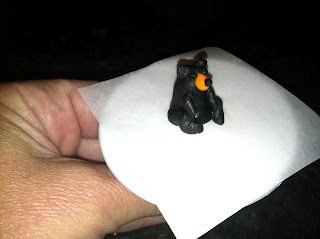 These would be a perfect adornment for any cake involving honey, nuts, or berries; all things that bears love to eat. Of course, they also love to eat garbage, but that's another story.