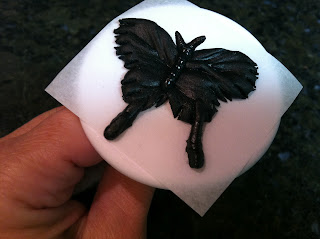 Yesterday's monarch butterfly was quite well-received…and left me with quite a lot of leftover black icing. So, today I tried piping another butterfly: the black tiger swallowtail, which happens to be the official state insect of Virginia. You'll need black stiff consistency royal icing, parchment paper squares, a flower nail, a Styrofoam brick to rest the nail in, round toothpicks, petal tip #104, and round tip #3. Start by sticking a parchment square to the nail with a dab from the glue stick. 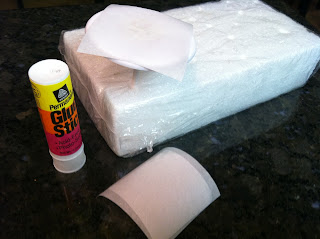 Hold the #104 petal tip almost flat against the surface with the narrow end aiming toward the middle of the nail, and pipe one of the butterfly's wings. Move your hand as though you're writing a backwards, upside-down number "3". 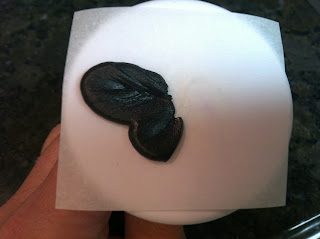 Rotate the nail and pipe a matching set of wings across from this first set. 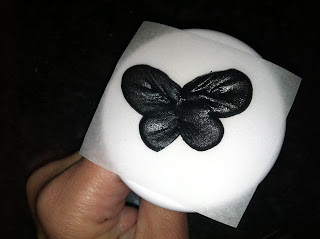 Work quickly so the icing doesn't have a chance to set. Using the pointy tip of a round toothpick, lie it in the icing at the edge and draw it out along the sides of the wings to create an approximation of the wings' scalloped edges. . 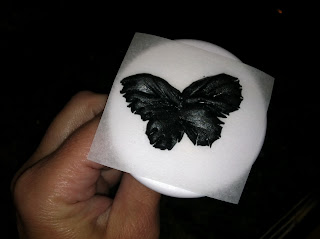 Switch to the #3 tip and pipe the "tails" off the lower halves of the wings. 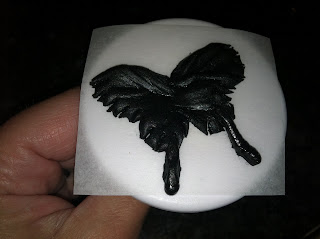 Also pipe the body with the #3 tip. As you pipe, jiggle or pulse the tip slightly to create ridges along the body. 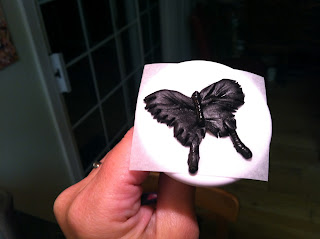 Also use the #3 tip to pipe the antennae. Hold the tip against the surface, squeeze briefly, and pull the tip away. This butterfly isn't actually pure black; it has some blue and orange spots on the wings (which I will add when I have icing in these colors handy!).