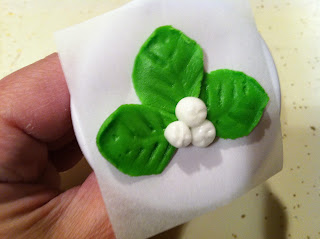 Wintergreen was designated the official state herb of Maine in 1999. It grows in wooded areas, and produces white flowers in the summer that produce red berries in the fall. I thought I'd attempt the summer version right now; perhaps I'll revisit piping wintergreen later this fall. All you'll need are stiff consistency royal icing in white and green, petal tip #104, round tip #8, flat toothpicks, a flower nail, parchment paper squares, a glue stick, a Styrofoam block to rest the nail in, and a dusting pouch filled with a 50/50 mix of cornstarch and powdered sugar. Start by sticking a parchment square to the nail with a dab from the glue stick. 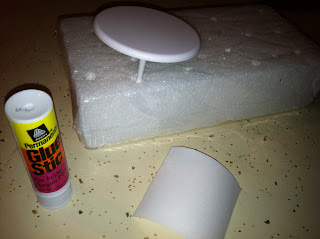 Pipe a green leaf with the petal tip. Hold the tip almost flat on the surface with the narrow end facing outwards and angled up slightly, then pipe while moving your hand in a tight upside-down "U" shape. 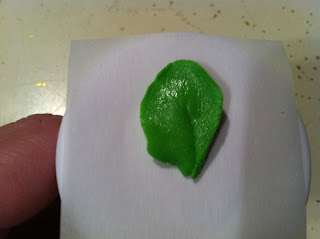 Repeat for a total of at least three petals. Touch your fingertips to the dusting pouch, and subtly taper the ends of the leaves. Touch the narrow end of the flat toothpick to the dusting pouch and gently press it into the icing on either side of the center line to form veins in a "V" formation. 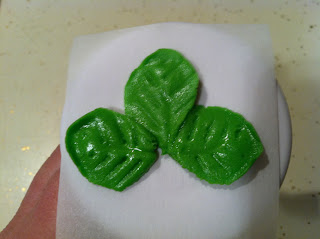 To pipe the white flowers, hold the #8 tip against the surface, squeeze while pulling the tip upwards, then stop pressure and pull the tip away. 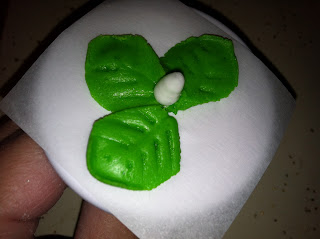 Dust the narrow end of another flat toothpick and gently press a 5-pointed star formation (sort of like an asterisk) to suggest the end of the bell-shaped flowers. These would be very appropriate decorations for any woodsy or minty dessert (even though I just read that wintergreen isn't actually a member of the mint family; news to me!).