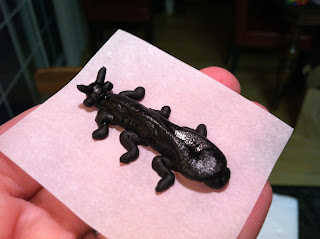 Delaware is the only state to designate an official macroinvertebrate: the stonefly, which was chosen because it's an indicator of the excellent water quality in Delaware (stoneflies are intolerant of water pollution). To pipe stoneflies, you'll need stiff consistency royal icing (there  are 3500 species worldwide in a variety of colors; the photo I was following featured one that was almost black), petal tip #101, round tips #3 and #2, oval tip #57, parchment paper squares, a flower nail, a Styrofoam brick to rest the nail in, a glue stick, and a dusting pouch filled with a 50/50 mix of powdered sugar and cornstarch. Start by sticking a parchment square to the nail with a dab from the glue stick. 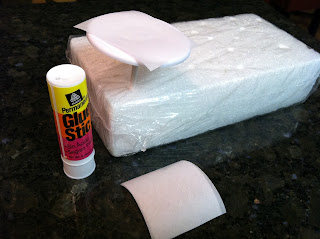 Pipe the legs first with the #3 tip. They look like three modified W's with an extra straight line in the middle (which the body will be piped on top of). 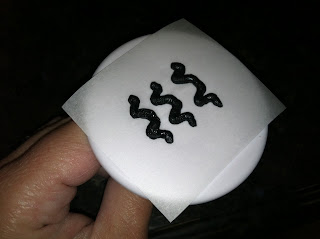 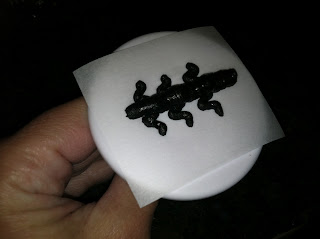 Pipe a ball with the #57 tip at the front for the head. 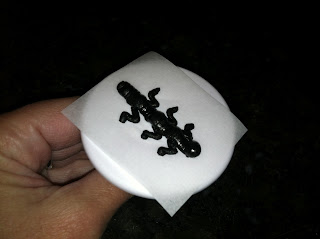 Switch to the #2 tip and pipe an eye on each side of the head and two antennae closer to the front. A real stonefly has extremely long antennae. If you tried to replicate them exactly in royal icing, they'd be very likely to break. With the eyes and antennae, hold the #2 tip against the surface, squeeze, stop pressure, and pull the tip away. With the antennae, move the tip away a short distance while you're squeezing.

Finally, switch to the #101 tip to pipe the long wings that run the length of the body. Hold the tip just behind the head with the narrow side of the tip facing outward. Pipe along the body to the opposite end, allow the icing to fan out into a rounded wing shape at the end, then move the tip back up to the base of the head. Touch the dusting pouch and gently blend the ridge between the two wings. Peel away the parchment after the icing has dried. Stoneflies don't make for the cutest creature you could ever hope to pipe, but could be an interesting decoration on a lake-themed (or even Halloween) cake.