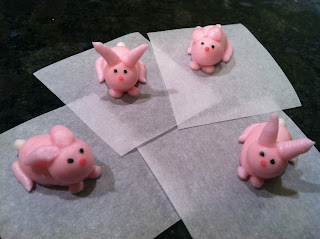 I wish I would have thought about piping bunnies last Easter! Oh well; I guess I'm planning ahead for next year. For now they can be company for the mice. To pipe a bunch of bunnies you'll need stiff consistency royal icing in white, deep pink, and light pink (or whatever color you want the bunnies to be), a dusting pouch filled with a 50/50 blend of powdered sugar and cornstarch, a parchment paper square for each bunny, round tips #12, #1, and #4, and oval tips #57 and #55 (by Ateco), and a black Gourmet Writer by AmeriColor. 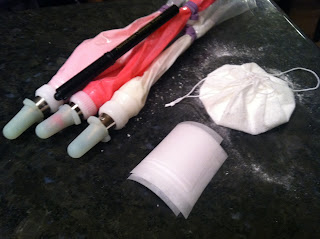 Using the #12 tip, pipe an egg for the body. If a peak remains like this when you stop the pressure and pull the tip away, touch a fingertip to the dusting pouch and tap the peak down. Allow the body to firm up for about 15 minutes, so it doesn't collapse under the weight of the… 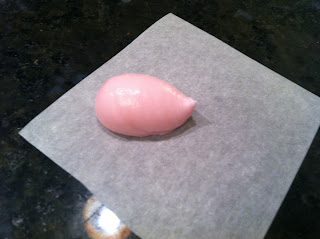 …head. Pipe a ball, and tap the peak down. 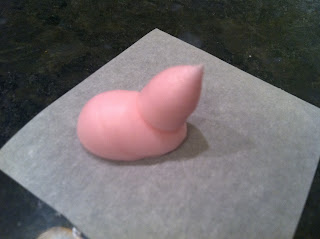 It should be smooth and round. You could gently taper it with your fingertips, if you like; that would probably make it look more like a real rabbit. 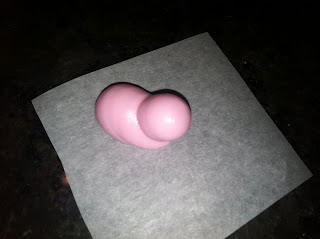 Switch the tip to the larger oval (#57) and pipe some ears, when the heads have had a chance to firm up. Some of the bunnies wound up being lops, and some are whatever the opposite of lops are. 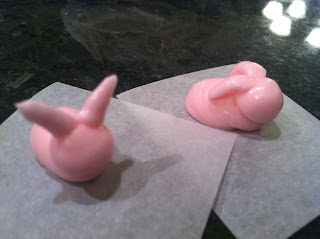 Switch to the small oval # 55, and pipe some hind legs. These are pretty minimalist, but I think anyone looking at them will get the idea that they're legs. Again, tap out any peaks left by the tip that look out of place. 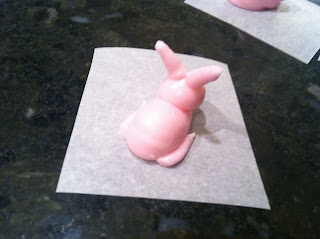 Use the same tip to pipe some tiny little forelegs, as well. 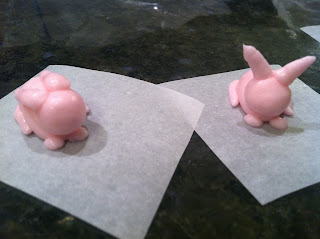 Switch to the white icing and pipe some little #4 ball tails. 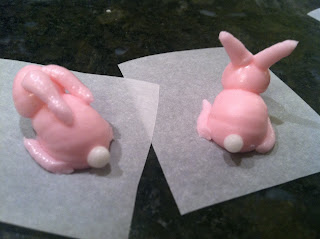 For the faces, I piped #1 dot noses with deep pink icing so the nose would have some depth, and then drew in their eyes with the tip of a Gourmet Writer. The final step is to build a house out of fondant and recreate scenes from the woefully-ignored creature feature "Night of the Lepus."