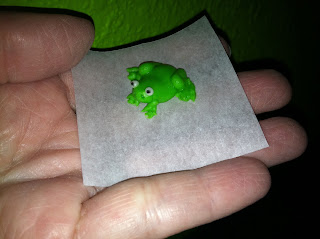 Ever since piping the water lily and lily pads, I've meant to get around to piping a royal icing frog to live amongst them. The delay? I simply wasn't sure how to go about doing it! I did some experimenting, and I think I came up with a good procedure. I needed a piping bag filled with green medium consistency royal icing and fitted with a round tip #12, parchment paper squares, a glue stick, and a flower nail (not because the frog needs to be rotated; the nail just makes handling it easier). I also needed round tips #3 and #5, white royal icing in a bag fitted with a round #2 tip, a toothpick, a dusting pouch filled with a 50/50 mix of powdered sugar and cornstarch, and a black AmeriColor Gourmet Writer. 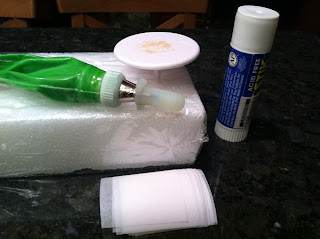 First, I stuck a parchment paper square to the nail with a dab from the glue stick. 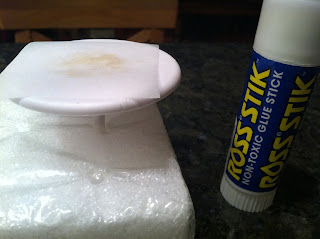 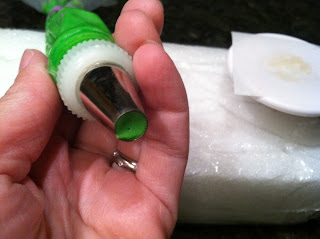 …I piped this shape for the frog's body. I started with the tip perpendicular to and just above the surface, piped a bead, then started to draw the tip away at an angle. After half an inch, I stopped pressure and pulled the tip away. I touched my finger to the dusting pouch, and gently tapped the shape into place. 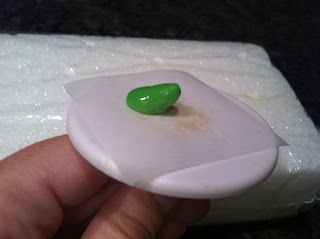 Here's a view of the frog's body from the back. 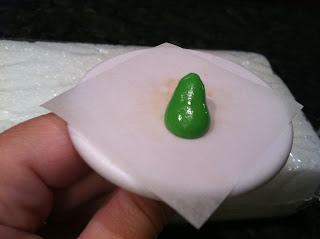 Then, I switched the tip to the round #5, and piped one of the legs, which was nothing more than a little squiggle (like a cursive "n", almost). 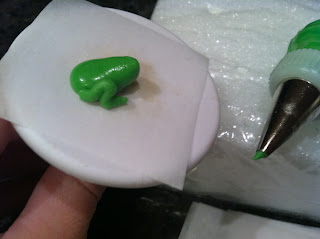 I piped a couple toes, while I was at it. 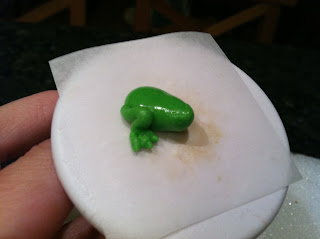 I repeated on the other side, and used the toothpick to perfect the toes a bit. 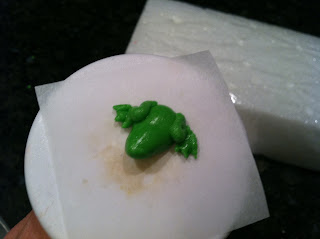 I also used the toothpick to carve in a couple of nostrils. I switched the tip to the round #3, and piped two front legs. The toes were piped/formed in a similar fashion to those on the back legs. 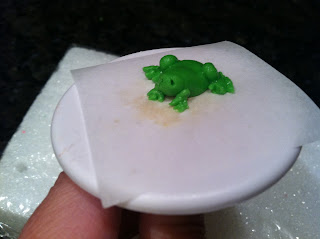 Then, I piped two #2 dots in white for the eyes… 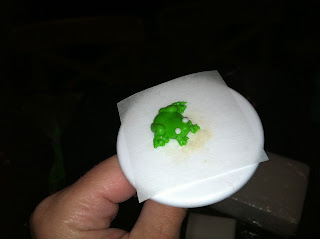 …and when they were dry added black dots with the AmeriColor Gourmet Writer. 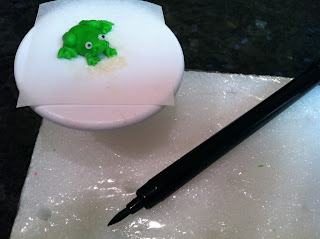 When the frog is dry, he'll easily pop off the parchment. The only problem is, he can't be put on a cake because he's too adorable to eat!