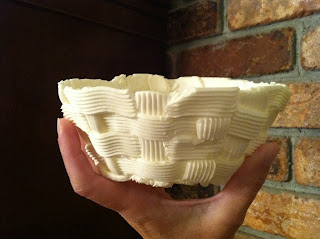 I guess I'm on an unofficial quest to pipe bigger and better things with royal icing. Ever since posting that tiny royal icing basket I piped on the underside of a muffin pan, I've wanted to try something larger. So, I found a bowl that had the shape I was looking for, and fitted a large piping bag with the basketweave tip #2B by Magic Tip, and filled it with stiff consistency royal icing. First I rubbed a thin layer of Crisco all over the bowl, then put it on a turntable. 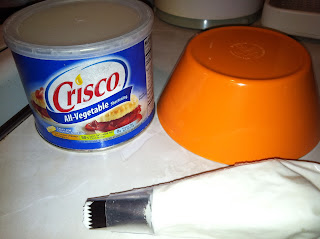 The procedure for piping is pretty much the same as for doing basketweave on a cake. 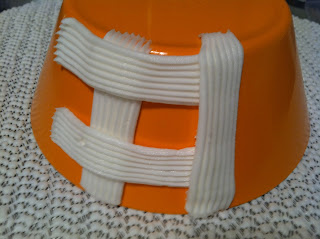 I left a bit of a gap at the base, just so the icing wouldn't stick to the turntable. 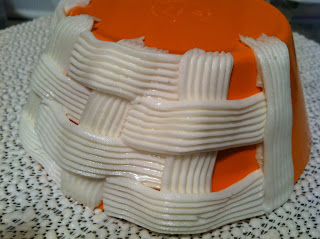 Eventually I did lift the bowl gently by the edge, and slipped the non-stick rubber material away; that bowl wasn't going anywhere. 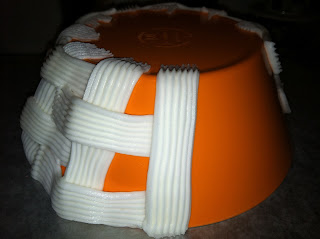 After the sides of the bowl were fully piped… 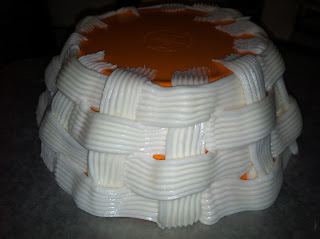 …I moved on to the base. It was some of the sloppier work I've done, but I figured it was an experiment and no one was ever going to judge the underside of the bowl too harshly. 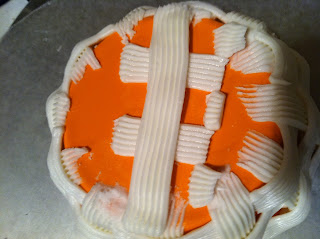 Here it is, fully piped. I allowed this bowl over a week to dry, but it was probably ready after about 5 days. 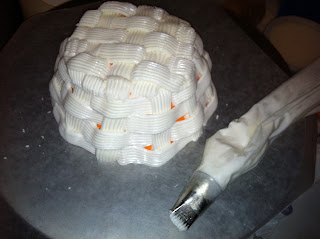 Next time I try something like this, I'm going to use a tip that's serrated on both sides, so it doesn't fuse to the bowl underneath quite so much. I'm also inclined to try a bowl that has some flexibility to it. When the royal icing bowl finally popped off the bowl underneath, a couple of large pieces broke off, but they were able to be cemented back together easily enough with more royal icing (truly the Krazy Glue of cake decorating). I may pipe a shell border around the edge, just to neaten it up. This bowl will probably be used to display gum paste flowers on top of a cake; I'm still not sure "why" I made it…I just wanted to see if it was possible!