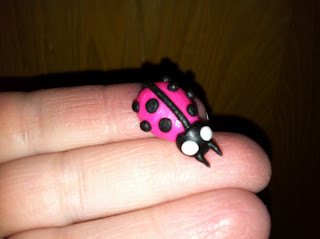 Yesterday's ant even bugged me a little; it was just SO realistic and icky. So, today I piped a ladybug (which a few folks have been asking for, so here you go). All you need are stiff consistency royal icing in black, white, and red (as you can tell I used hot pink, so scratch that last requirement), parchment paper squares, a flower nail, a glue stick, round tips #12, #2, #8, and #1, and a dusting pouch filled with a 50/50 blend of powdered sugar and cornstarch. Start by piping an egg with the #12 tip, held just above and at a 45 degree angle to a parchment square. 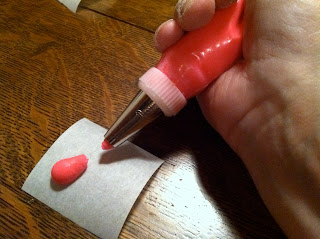 Round the tip into a true egg shape with a fingertip after touching it to the dusting pouch. 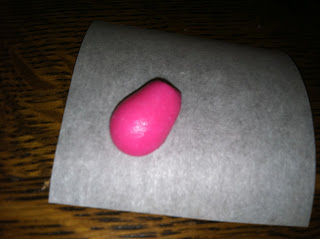 Make an egg for each ladybug's body. 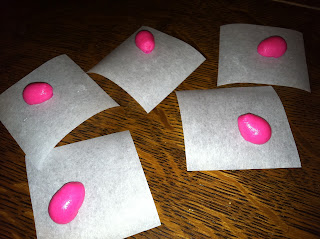 After they've firmed up for a while, pipe a #2 line down the center with the black icing. I used Super Black by AmeriColor. I stuck the squares to the flower nail with a dab from the glue stick for this step; I find piping details to be a lot easier when I can hold everything up close to my eyes and not have to lean over the counter. Allow the line to fall out of the tip, sort of like you're piping a drop string, to keep it smooth. When you pull the tip away at the end, tap it flat with your fingertip. 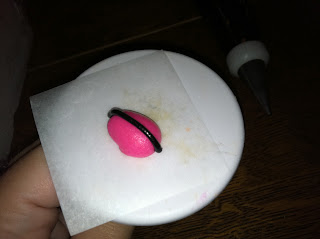 Switch to the #8 tip and pipe the head. It's basically a ball. Hold the tip almost against the body, squeeze out a ball, and as you pull the tip away, stop pressure. Tap the head into a round shape with your dusted fingertip if a peak remains. 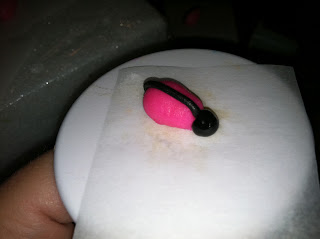 This part is so fun: the dots. Try to make them relatively symmetrical, if you're being a stickler for accuracy. Use the #2 tip, hold it just above the surface, squeeze out a dot, and pull away. 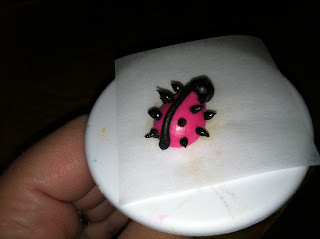 Tap the dots flat with a fingertip (unless you want your ladybug to look dangerous, punk, or otherwise evolved). 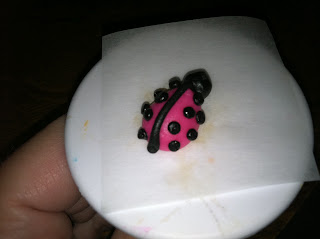 Pipe #2 dots for eyes with the white icing in the center of the head, flattening them as well. 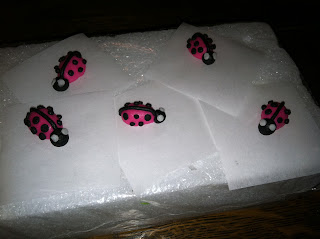 Lastly, pipe the antennae. Use black icing and the #1 tip. Hold the tip against the front of the head, squeeze, and pull away. Stop pressure after a very short distance. Adjust the direction of the antennae with a fingertip if they're heading off in two completely unrealistic directions. 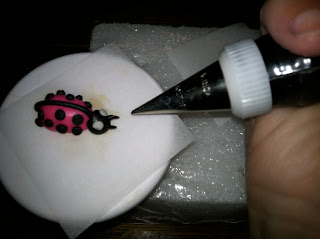 These could be piped in any color to match any theme. I think they'd be sweet on any sort of dessert for a garden party, or even for Halloween (I think they already look sort of sinister; imagine if they were piped in orange and black!).