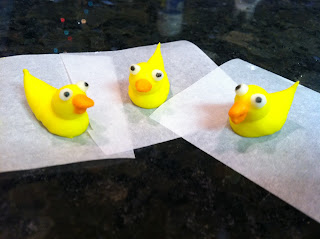 For me, nothing inspires new ideas for cupcake toppers more than seeing ones made out of plastic. You know they're probably all going to wind up in landfills! Today's post is the result of my seeing a whole tray of cupcakes topped with (not very cute) duckies at a bakery this morning. Rubber duckies are always a sweet choice, but probably most appropriate for adorning cupcakes or other small desserts served at showers. All you need is stiff consistency royal icing in yellow, orange and white, parchment paper squares, a black Gourmet Writer by AmeriColor, round tips #12, #10, and #3, oval tip #55, and a dusting pouch filled with a 50/50 mix of powdered sugar and cornstarch. Start by piping the body. Hold the #12 tip at a 45 degree just above a parchment square. 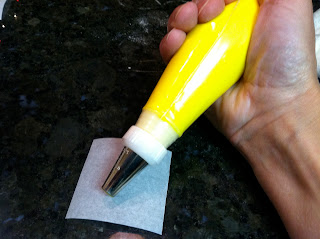 Squeeze until you've formed a ball, then draw the tip along for a short distance to make the ball into an oval. Stop pressure and pull the tip away at an upwards angle to form the peak that is the tail. 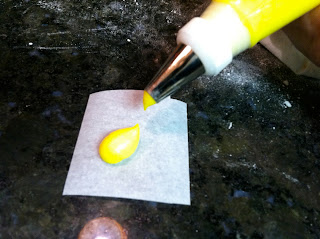 The body should be shaped like a chunky teardrop. Allow them to firm up for a while; speed this process along by placing them under a desk lamp. 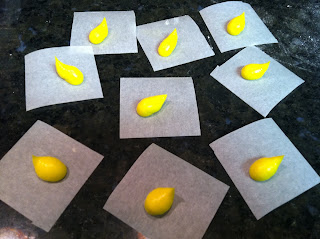 Switch the tip to the #10. Hold the tip just above the round end of the body, again at a 45 degree angle. 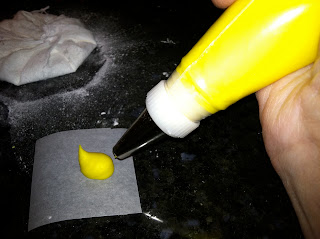 I never do a good job at piping a ball on the first try in a circumstance like this; invariably I wind up with more of a cone… 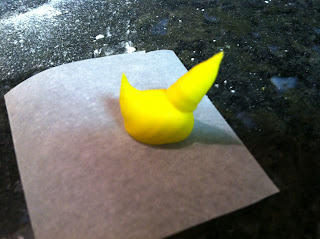 …which can easily be tapped into a ball gently with a fingertip after touching it to the dusting pouch. 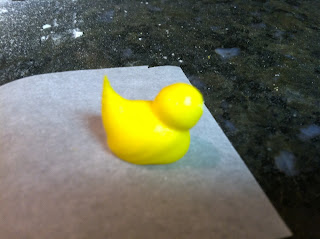 Allow the heads to firm up while you get the orange icing ready in a bag fitted with the oval #55 tip. 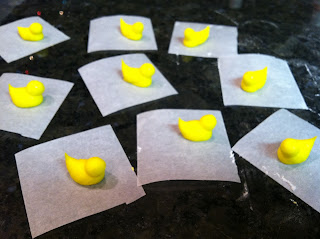 Pipe the bill by holding the tip against the head, squeezing briefly while moving the tip away, then stopping pressure and pulling the tip away completely. Round the bill with a fingertip (it will probably be pointy like a bird's beak when you pull the tip away). You can pipe either one or two of these shapes; two will make the bill appear to be open. In the final photo, the center duck only has one. 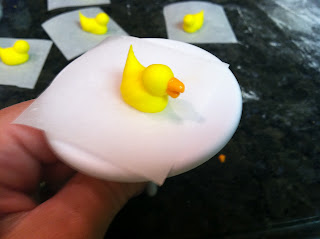 Pipe the white eyes with the #3 tip; hold the tip just above the surface, squeeze out a tiny amount of icing, and pull the tip away. Flatten the eyes slightly with a dusted fingertip; this will help adhere them to the head. 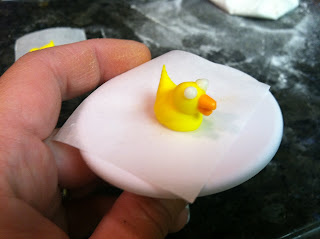 When the white icing has dried, add dots for pupils with the Gourmet Writer. I'm sure these duckies will be happier once I've gotten around to piping them some bars of royal icing soap.