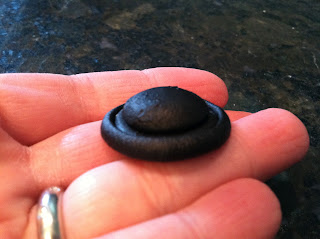 I'm going to do my best to come up with as many British and Olympic-inspired projects as possible over the next couple of weeks. I want to get things going with one of my favorite accessories of all time: the bowler hat, which I first became aware of back when Culture Club was my favorite band (I was a very flashy 'tween at the time…except the word 'tween hadn't been invented yet). The base of the bowler is very similar to the pots of eyeshadow from last night. All you need is round tip #12, oval tip # 57, stiff consistency royal icing in black, parchment paper squares, a flower nail, a glue stick, and a dusting pouch filled with a 50/50 blend of powdered sugar and cornstarch. Fit the bag of black icing with the #12 tip, hold it just above the surface of a parchment square on your countertop, and pipe a quarter-sized circle (if a hole remains in the center, don't worry). 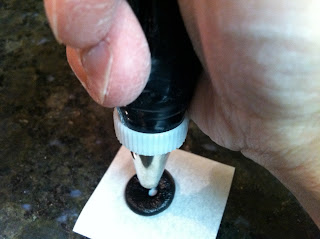 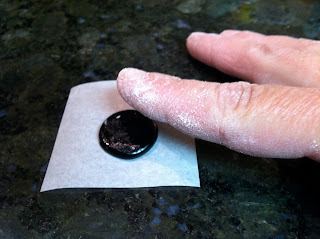 Allow the discs to firm up for a while. You can speed up this process by placing them under a desk lamp. 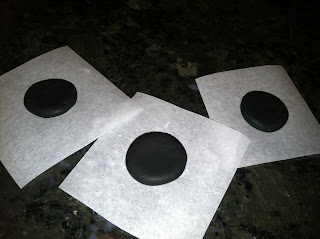 Hold the tip just above and at a right angle to the center, and squeeze out a ball of icing. Pull the tip away straight up. If a peak remains, tap the icing into a rounded shape with a dusted fingertip. 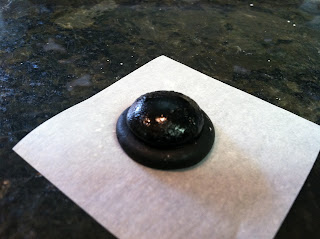 Switch to the oval tip #57. Carefully stick what you've piped so far, still on its parchment paper, to the flower nail with a dab from the glue stick. To form the outer edge of the hat's brim, hold the oval tip upright against the edge. Pipe all the way around while you rotate the nail. Where the two ends meet, tap them together with a dusted fingertip. 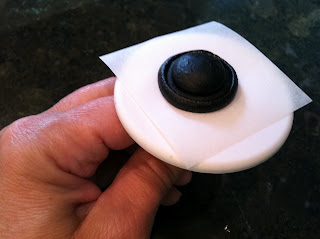 Feel free to send me more British and Olympic ideas! I promise, I'll try to pipe a pint soon.

Posted by Denise Delaney at 6:00 PM