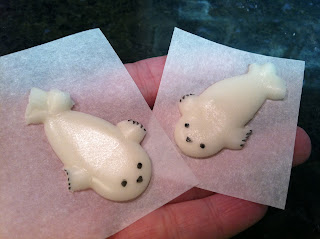 The nice thing about piping harp seals is the real thing pretty much resembles a puddle of icing all on its own. There's not a whole lot to it! All you'll need are round tip #12, petal tip #101, parchment paper squares, white stiff consistency royal icing, a dusting pouch filled with a 50/50 blend of cornstarch and powdered sugar, and a black Gourmet Writer. Start by piping an elongated teardrop for the body. Hold the tip just above the surface and at about a 45 degree angle, pipe a ball, and as the ball forms, pull the tip away. After about half an inch, stop pressure and pull the tip away. 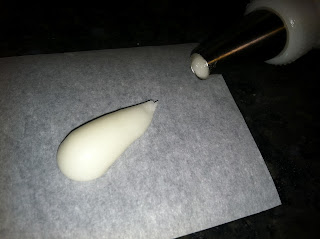 Now pipe the head, which is basically a ball. A peak will probably remain when you pull the tip away that will add nothing to the harp seal-esque quality of this shape, so touch a finger to the dusting pouch and tap it into place. 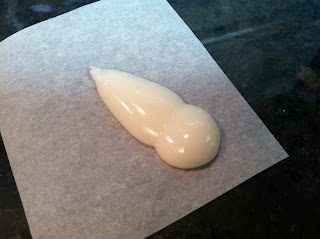 Unfortunately, the icing I was working with wasn't as stiff as I would have liked, and the shape wound up flattening out more than I'd anticipated (it looks almost perfect in the above photo; in the shot below, not so much). However, harp seals tend to strike this pose a lot, so I soldiered on by piping flippers with the #101 petal tip. I kept the wide end of the tip against the body, and moved the narrow end in an upside-down "U" shape on each side… 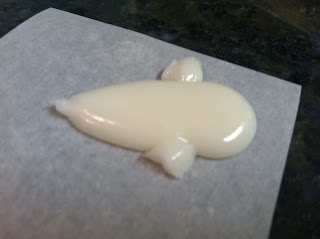 …and did two more, right against each other, at the tapered end of the body. If the head had been a bit more bulbous, this would have wound up being a tutorial for a beluga whale. 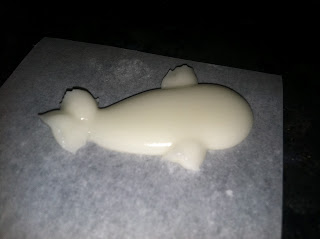 Allow the icing to firm up, and add features and claws with the Gourmet Writer. Resist the urge to pipe ears; they aren't visible. Use the harp seals to decorate a snowy cupcake (but I have a feeling nobody would actually want to chomp into these little darlings).