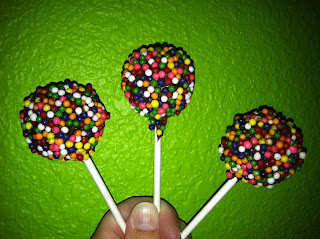 I signed up to take Wilton's Cake Pops class this week. Imagine my surprise when the first project had nothing to do with cake! We made pops using Rice Krispy Treats, and they actually turned out really tasty! You can use pre-made RKTs (as I'm going to refer to them from this point on) or you can make your own. I happen to know a fabulous trick for doctoring up the classic scratch method, so I'll tell it to you: just before you remove the pot containing the melted 4 cups of mini marshmallows and 3 tablespoons of butter from medium heat, add a teaspoon of the best vanilla you can find. Stir it up, remove from heat, then add the six cups of Rice Krispies, stir until evenly coated, then press it into a greased 11x17" pan using your greased fingers. That vanilla makes all the difference, and your end result will be a more golden color. In addition to RKTs, you'll need 4" lollipop sticks, a Styrofoam block, a Pyrex cup, something to decorate the pops with (I used jumbo-sized nonpareils), and a bag of chocolate pieces made specifically for melting (do NOT use chocolate chips; they won't melt smoothly); I used dark chocolate Melt n' Mold pieces by Guittard. 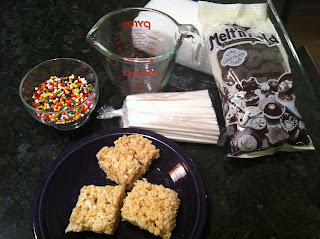 Start by breaking up the RKTs into small pieces on a plate or a piece of waxed paper. 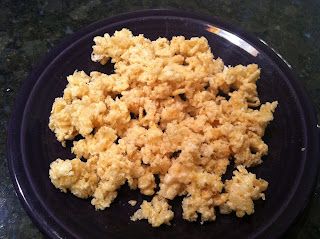 Pluck off a mass of pieces; this one equals somewhere between 2 and 3 tablespoons worth: 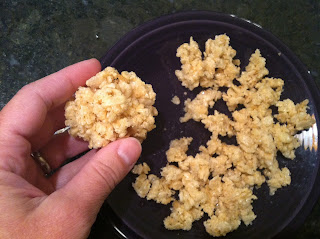 Roll the mass between your hands into a ball. Really pack the RKTs down; you want to hear them snap-crackle-pop as you crush them together. 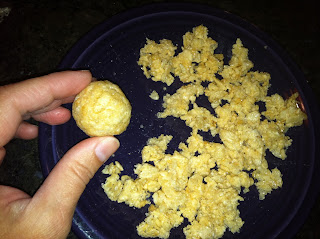 Obviously, make sure your hands are immaculately clean before you roll the balls. 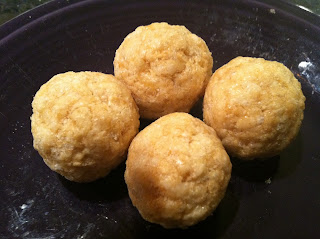 Next, melt some chocolate. I filled the 1 cup measure about halfway, which was more than enough to coat these four balls. 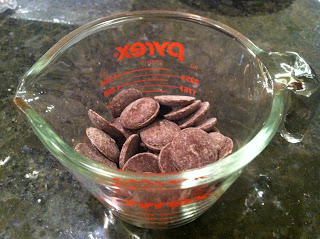 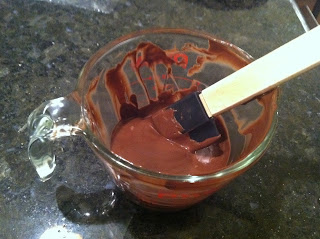 Dip the tip of a lollipop stick into the chocolate… 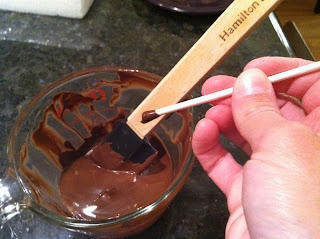 …then stick it into one of the balls. Push the stick almost all the way to the opposite side, but don't push it through. If you place your finger on the side of the ball where the stick would pop out, you'll be able to feel it coming before it actually does and stop pushing in time. 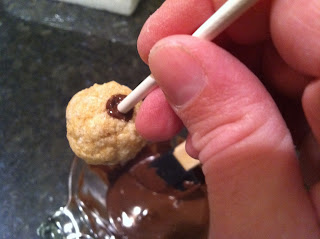 Lie the balls on their sides and let the chocolate dry; you'll know it's dry when the surface is no longer shiny. 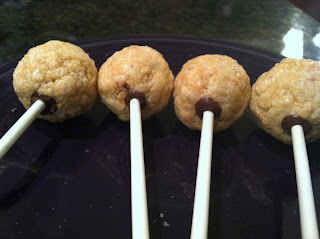 Wipe the edge of the Pyrex container clean, then dip one of the pops into the chocolate at an angle. Allow the chocolate to coat a little of the stick, right where it meets the pop; this will help anchor the pop to the stick. 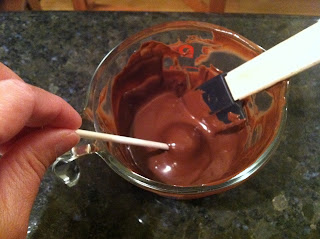 Remove excess chocolate off of the pop by tapping the stick against the edge of the container. Rotate the pop as you tap. 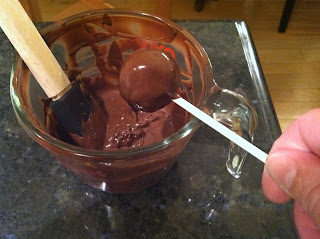 Stop when the surface is relatively smooth (but it doesn't need to be perfect). 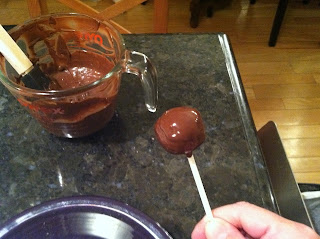 Before it hardens, sprinkle the chocolate with nonpareils or whatever toppings you like. It's best to not dunk the pop directly in the toppings; you'll have a cleaner result if you sprinkle them on instead. 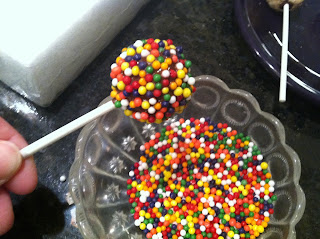 Push the pop by the stick into the Styrofoam block, and place in the refrigerator to firm up for about 15 minutes. 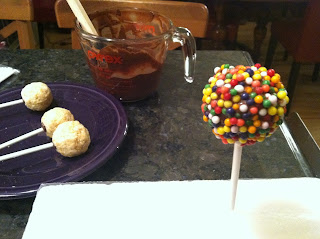 You can wrap them up with little cellophane lollipop sleeves found on the candy aisle, or serve them up immediately. If there are kids within a mile of this project being made, it'll probably be the latter.