Recipe for my Favorite Buttercream Icing 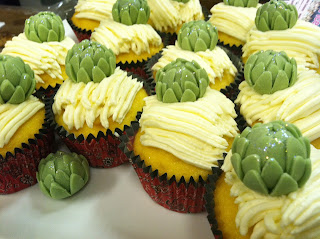 Back when I took Wilton Course 1: Decorating Basics, I was introduced to Wilton's recipe for a vile substance they refer to as "buttercream icing"; a totally inappropriate name in my mind, because it contains neither butter nor cream. Its main ingredient is Crisco, and its greasy mouthfeel is truly gag-worthy. I thought, if all buttercream is like this, maybe making cakes isn't for me. I fooled around with a few recipes and eventually wound up getting more into royal icing, gum paste, and fondant, but recently discovered and adapted a recipe for buttercream that has become my new workhorse. As you can see from the above photo, you can pipe with it and it will hold its shape (I was attempting to suggest hay or straw under a bushel of gum paste artichokes, using Ateco's Tip #234). It's based on the "Decorator's Buttercream" recipe on page 154 of Buddy Valastro's excellent book, Baking With the Cake Boss.

Start by sifting a 2 pound bag of powdered sugar into the bowl of a stand mixer. Buddy's recipe calls for "2 1/4 cups of vegetable shortening" to be added to it; basically, Crisco. While this would make the icing snowy white, it would also probably just be a variation on Wilton's disgusting concoction. On a whim, I used 2 1/4 cups of Crisco's Butter Flavored Baking Sticks and was amazed that this stuff actually tastes (and behaves) like butter; it even has 50% less saturated fat than butter. Continuing with the recipe, add 3/4 stick of unsalted butter, any food coloring you're going to use (use a paste or gel color, like AmeriColor's Soft Gel Paste), and 1 1/2 tablespoons of pure vanilla extract (use clear vanilla if you don't want to further tint the icing, or use any flavor or combination of flavors you like; my signature blend consists of three different flavors I'm not quite ready to disclose to the world). Using the paddle attachment, beat the ingredients at medium-low speed for about 3 minutes until smooth, pausing every so often to scrape the bowl and any unbeaten ingredients off the paddle. With the stand mixer running, add 6 tablespoons of water in a thin stream and keep beating for about 3 minutes (until the water gets absorbed). The icing will be the pale yellow color in the above photo, and can be stored in the refrigerator in an airtight container for about 2 weeks. This recipe yields 6 cups, and can obviously be multiplied or divided as needed.

Oh, and a friend of mine was so impressed with this buttercream's taste and consistency, he said he'd like to run a batch through his ice cream maker and eat it with a spoon; I've never heard that about icing before! Good stuff…
Posted by Denise Delaney at 10:31 PM