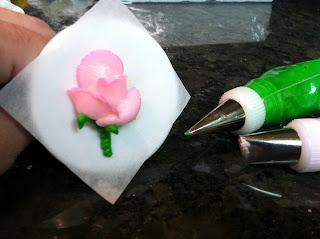 About a week ago I posted about the rosebud, which is perfect for piping directly on cookies, petits fours, etc. The half rose is basically the rosebud with an extra petal on either side to bulk it up; in fact, you can make it as large as you want by adding extra petals to the sides. You'll need a Styrofoam block, a flower nail, a parchment paper square for each half rose (these should be cut a little larger, about 2x2"), a non-toxic glue stick, a dusting pouch filled with a 50/50 mix of powdered sugar and cornstarch (you may need to touch your finger to the dusting pouch to tap out any mistakes), a piping bag filled with green icing and fitted with a round #3 tip, and a bag filled with any color icing you like, fitted with a #104 petal tip. 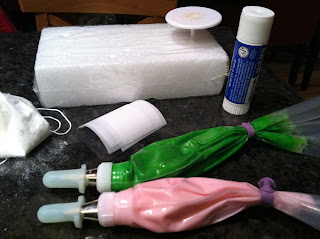 Start by sticking a parchment paper square to the flower nail with a dab from the glue stick. 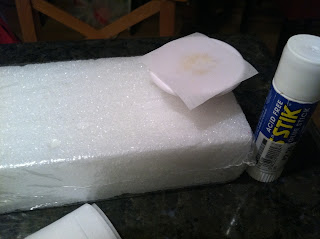 Holding the petal tip almost flat on the nail, pipe the first petal (I go into further detail on this petal and the next in the rosebud tutorial; there are lots of photos taken from every angle there, too). 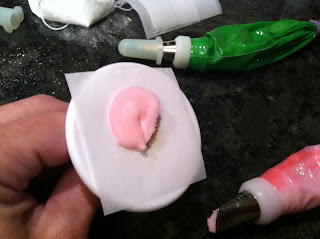 Tuck the petal tip against the side of the first petal and pipe the second petal; it should catch on the edge and spiral over: 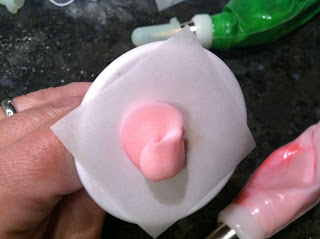 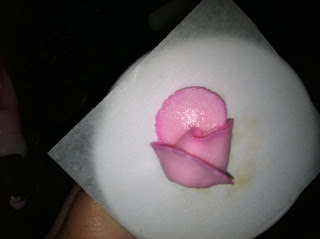 Here's a view from the underside, looking up: 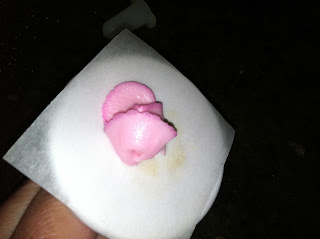 Then, pipe a similar petal from the right side. Start with the tip against the right side of the rosebud, with the wide side of the tip against the bud's base. Pipe a petal up, across, and down to the center of the rosebud. I'm not sure exactly what angle I was holding the tip that caused the right petal to curl over at this extreme angle. It was unintentional, but I kind of like it! Hopefully it's one of those things that can be recreated through practice. 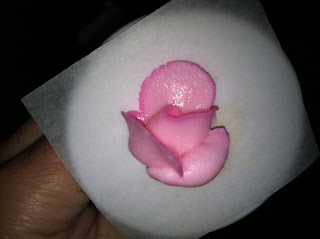 Finally, you'll want to pipe the sepals and calyx; the directions are the same as for the rosebud. I used a round #3 tip, and piped three sepals, starting with the middle one, then piping one on either side (only the left one is visible here), then joined them together with a calyx that tapers down into a stem. Allow the half rose to dry for a while until it slides easily off the parchment paper (you can speed up the drying time by placing it under a desk lamp). Not only would the half rose be sweet on a petit four, it would look good decorating the side of a cake as part of a border.