Piping a Rose on a Cupcake 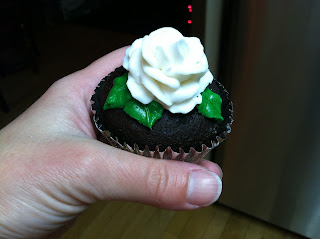 I got a really swell book for Christmas: Baking With the Cake Boss, by Buddy Valastro. 90%+ of the time I'll blindly accept anything Buddy says as the last word in cake decorating, but there's one concept in this book I just can't get behind, regarding roses on cupcakes: "…you will want to use a rose nail for making roses for both cakes and cupcakes. Piping directly onto cupcakes is best left to the professionals." Really? C'mon now; this is cake decorating, not freakin' rocket surgery! All it takes is a statement like that for me to find a way to defy it, so I think I've got it down and I'd be remiss in not showing it to you posthaste. Here's what you need: 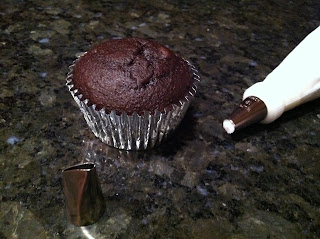 That's it: a cupcake, a pastry bag loaded with medium-consistency icing (softer than toothpaste, but stiff enough to hold its shape) and a round Wilton #12 tip on a coupler, and a Wilton #104 rose tip on standby. If you're piping a whole batch of these, do this first step on all the cakes: with the #12 tip, hold the bag perpendicular to and just above the center of the cupcake. Squeeze firmly; allow the icing to spread out to about the size of a quarter, then start moving the bag away from the cupcake while decreasing pressure. When the shape is more or less that of a Hershey's Kiss, stop pressure and pull the bag away. If the shape is even close, it will probably work. If it's nowhere near close, pluck it off and eat your mistake. Alternately, practice on a piece of parchment or waxed paper until you have it down, and then scrape all your mutant Kisses off with an offset spatula back into the original icing container or the pastry bag. 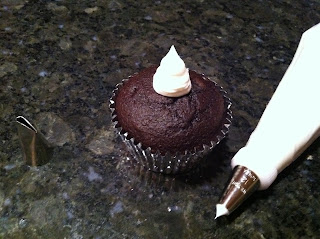 The next step will be piping petals, so switch to a Wilton tip #104. I think what Buddy was saying about how to not attempt to pipe roses directly on a cupcake without a nail had something to do with the ease of rotating you get with a nail; it basically is a tiny turntable. To a slightly lesser extent, you can get the same effect with your hand. This is the first position; holding the cake, turn your hand in as tightly as possible: 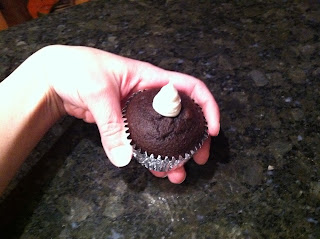 And this would be the final position, with your hand rotated as far away from you as possible: So, it's time to start piping petals. Bear in mind, for the next several steps the cake is held in the non-dominant hand, which I couldn't do while holding the bag and the camera, so the cake is on the counter and not in-hand. Switch the tip on the bag to #104, and get familiar with holding it at this angle to the "Kiss." The wide side of the teardrop-shaped tip will be down (which should be logical; you want the edges of the petals to be thinner than the base, right?).The tip should also be angled away from you slightly, and not perpendicular to the "Kiss" (if it was, when you start piping you'd knock it over; the goal is to wrap the first spiral of icing around the "Kiss"). Start with the narrow end of the tip just above the "Kiss"… 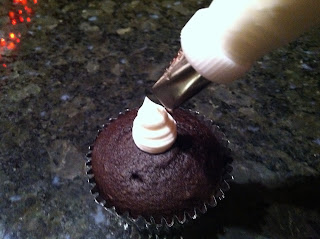 …and pipe a continuous spiral around the top of the "Kiss," using the starting-and-ending hand positions pictured above: 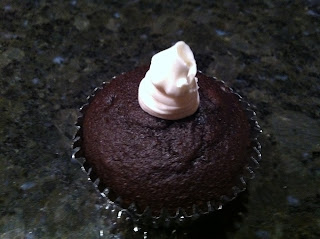 Ideally that little hole in the center of the spiral would be looking upwards, but this is close enough and not bad for a first attempt. Guess what: the hardest part is over, and now all you need to do is pipe petals to cover the rest of the "Kiss". The first row consists of 3 overlapping petals (again, use the starting-and-ending hand positions to rotate the cake around while you pipe). The wide base of the tip is touching the "Kiss" and the narrow end is angled slightly outward. There's a very slight upside-down "U" hand motion involved with the piping of each petal, but as you squeeze the shape will form pretty naturally; you won't need to force it into existence with a lot of hand movement: 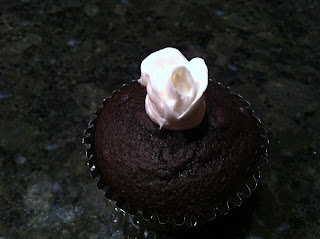 Here's the next layer of 5 overlapping petals; note the tip is angled slightly more outwards (otherwise your rose would have rather unnatural, parallel rows of petals). It also looks more natural if you manage to not line up each row of petals with the one before it; try to offset each row a little, like tabs in an accordion folder: 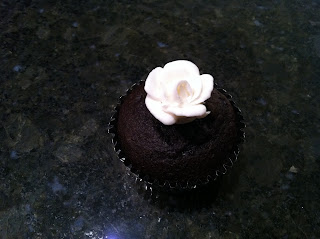 Next, pipe a row of 7 petals, or however many you need to finish covering the "Kiss." After the row of 7, I stopped counting. I think there was one more row that also had 7 at the very base. By the time you get to that final row of petals, the tip will practically be lying flat on the cupcake; do whatever you can to get the petals in there: 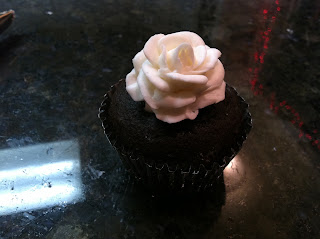 To finish this rose off, it's nice to pipe some leaves. I had an Ateco Tip #69 on a bag of green icing lying around, so I piped a few. Push the end of the tip under the rose and start squeezing while you pull out a leaf. when it's the length you want, stop the pressure and pull the bag away. If the leaves' edges look ragged, you can pinch them into a nice leaf shape with your fingers; touch your fingertips to a dusting pouch filled with a 50/50 mix of cornstarch and powdered sugar so they won't stick to the icing (I had to do this with every single leaf in this photo because the icing was very thick and the edges tore and were not pretty): 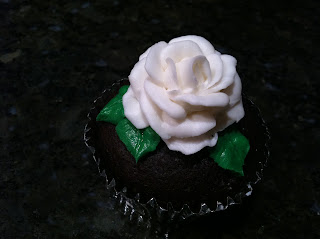 Well, that's it. In closing, I'd have to say I prefer to pipe roses on a rose nail and then transfer them to the cupcake with a flower lifter, but if all I had handy were my hands, they're a couple of pretty well-made machines that get the job done.
Posted by Denise Delaney at 12:36 PM