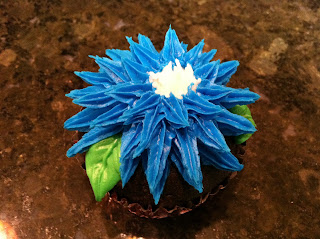 Cornflowers (also referred to frequently in Wilton books as bachelor's buttons) are one of the easiest flowers you'll ever learn how to pipe. When you need a true blue flower, they're an excellent choice. According to Wikipedia, cornflowers were JFK's favorite flower, and they are one of the ingredients in Twinings Lady Grey Tea (of which I'm very fond). Cornflowers can easily be piped directly onto a cupcake, as I'm going to show you. Start by loading up three bags with green, white, and blue icing. Instead of white, you could use a lighter blue (but white is what I had so I used it; plus I found a photo that shows some white flecks around the center of the cornflower). The blue and white bags require couplers; the green does not. Use a leaf tip on the green bag (such as Ateco #69), and start with a round Wilton #12 on the white bag and a star tip (like Wilton #18) on the blue bag. Have a smaller star tip (in this case, #16) and a multi-hole tip (such as Wilton #233) on standby. 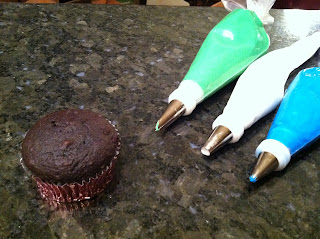 Begin by piping a mound (more flat than round) in the center of a cupcake. Hold the tip in the center just above the surface, and squeeze hard; withdraw slightly as the mound builds up, but keep the tip buried. Stop the pressure and pull the tip away once the mound is about the size of a quarter. 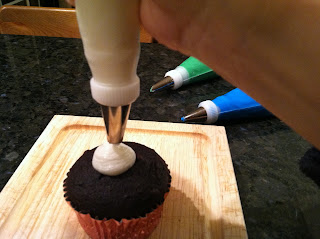 Switch to tip #233, and pipe a few "stamens." Hold the tip just over the surface of the mound, squeeze hard, and once the icing has had a chance to get anchored, stop the pressure and pull the tip away. Repeat a few times in the center of the mound. 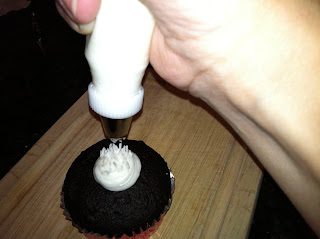 Here it is, up close: 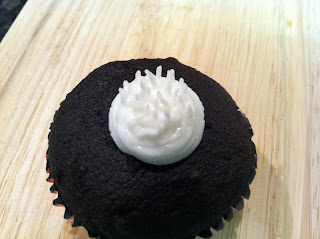 Now, start piping petals. This first row will be more or less piped along the cake's surface. Hold the star tip very close to the mound, and squeeze hard. As the icing builds up, it should almost push the tip away off the domed part of the cake. Stop the pressure and pull the tip away to achieve that tapered look. 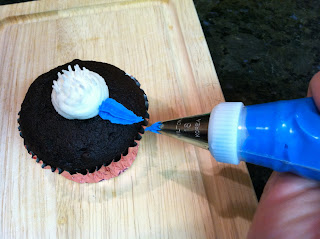 Do this squeeze-and-pull technique all the way around the mound to finish the first layer of petals. 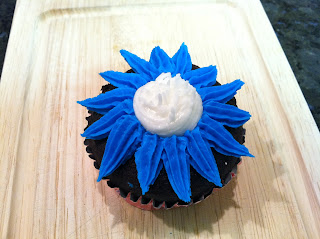 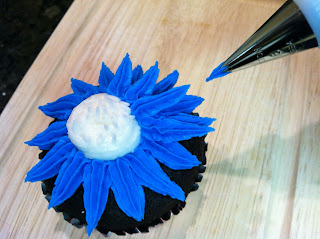 Here is a completed layer of #16 petals: 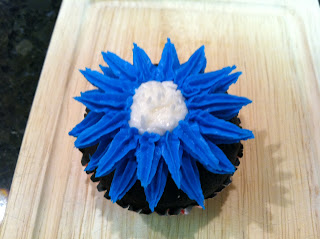 Finally, pipe a few more petals at an even steeper angle around the center; they should be shorter than the previous layers: 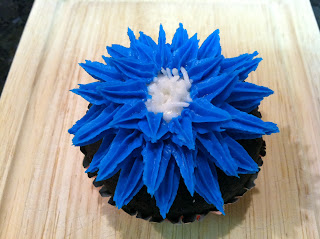 Tuck in the leaf tip at the base, and pipe a few leaves, if you're so inclined. Hard to believe the cornflower is considered a weed! Definitely think of it next time you're choosing flowers for a patriotic theme. Happy Presidents' Day! 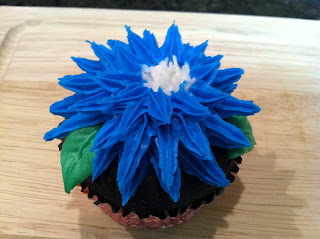