Fondant Pennant on a Baseball Cake 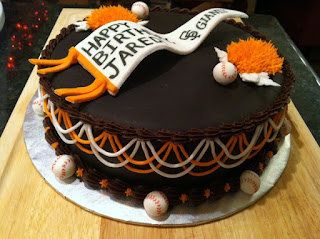 I just put the finishing touches on a baseball-themed birthday cake for a fan of the San Francisco Giants. I was looking for an alternative to writing in cursive with icing, so I decided to try my hand at making a pennant to convey the birthday message. I had some of my fondant from scratch colored with Wilton White White Icing Color left over from making baseballs, so I rolled out a rectangle about 8" long after dusting the counter with powdered sugar: 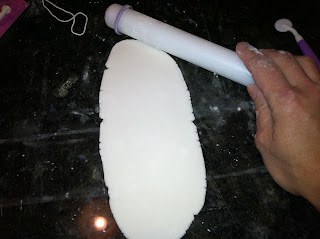 I cut out a triangle, using the cutting wheel tool that came with the Wilton Deluxe Gum Paste Tool Set: 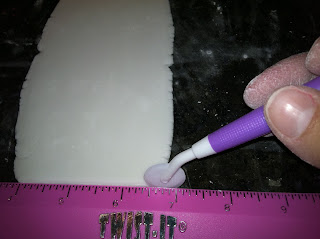 I used the quilting wheel (at the other end of the same tool) a couple of millimeters in from the edge: 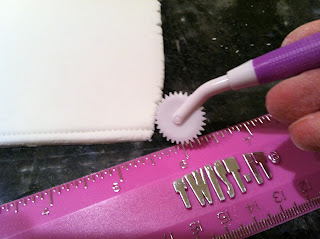 I nudged the ruler up against the edges, just to make sure they really are straight: 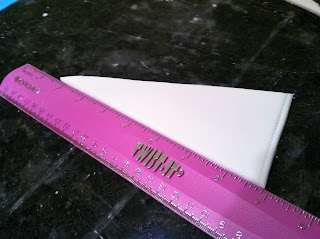 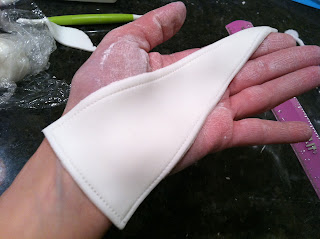 …which I laid out to firm up overnight on a wave flower former, covered with a piece of waxed paper dusted with powdered sugar: 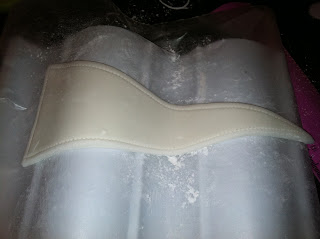 I colored a small amount of fondant orange, and cut out a small strip to attach along the edge of the pennant… 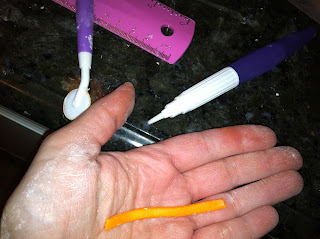 …with a water brush. I also cut out 2 smaller strips; I folded them in half at "V" angles and trimmed their ends diagonally. 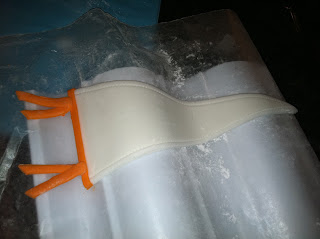 I didn't attach these to the pennant until I assembled everything on the cake. I put a small amount of Wilton's Ready-To-Use Decorator Icing underneath the pennant in the places where it touched the cake:

The writing on the pennant, incidentally, was accomplished with Wilton FoodWriter Edible Color Markers, as were the "stitches" on the fondant baseballs, one of which is pictured below (alongside a shaggy mum or "pompom flower"): 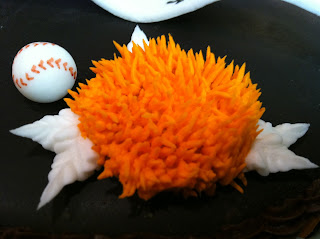 Drop strings might have been a peculiar choice for a baseball-themed cake, but I'll take any chance I get to practice them, along with shell borders of various sizes (that mostly served to hide the anchors for the drop strings and as "glue" for the fondant baseballs): 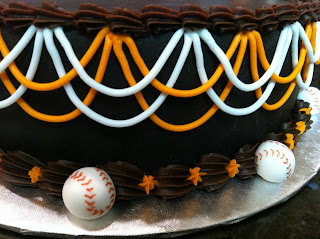 Here's the finished cake (which featured chocolate fudge cake, dark chocolate icing, and my chocolate fondant from scratch). I hope the recipient really did like chocolate! 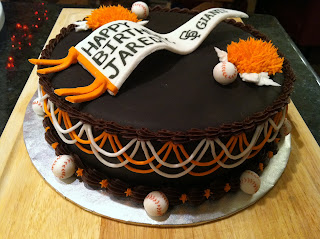