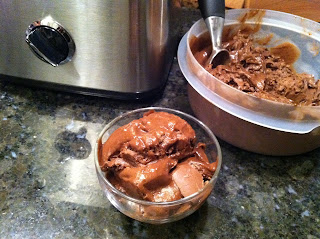 I've been blogging an awful lot about All Things Cake; it's time to diversify: ice cream! Ice cream inspired by Fudgsicles, no less. The recipe is absurdly easy; here's what you need: 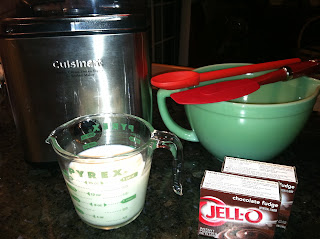 Two 3.9 oz. boxes of instant chocolate fudge Jell-O pudding, 3 cups of 1% (or higher) milk (DON'T use skim), a batter bowl, a scraper, and a mixing spoon. I'm not going to tell you this recipe is impossible without an ice cream maker, but it certainly makes things easier. Alternately, you could put the final mixture in a bowl in the freezer and stir it every so often until it's the right consistency (or even in a huge Ziploc freezer bag; give it a squeeze every so often). But for the purpose of this demo I'm going to run it through an ice cream maker. First, put both boxes of pudding into a batter bowl (or any container with a spout, ideally). 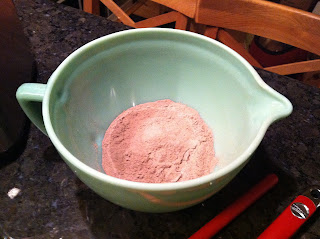 Add the 3 cups of milk and give it a stir. The formula is simple to adapt to different sizes of Jell-O boxes; if you're using one of those large boxes that makes 3 cups of pudding, use 2 cups of milk. Of course, you can use any flavor you want, as long as it's instant (the Cook n' Serve ones might work, but I have reservations about trying them; plus, there are so many more flavors available in instant). The mixture will be lumpy; no worries, as the spin around the ice cream maker will smooth it out. 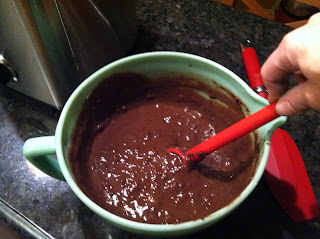 This is what an assembled ice cream maker looks like, incidentally. They're all pretty much the same (I've owned 3; they all had more or less the same parts). The large light-colored silver cylinder is the part you store in the freezer until ready to use. 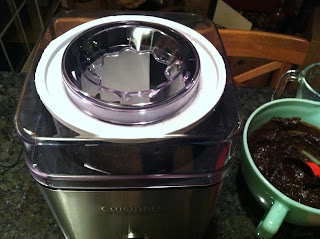 Into it you drop the blade. As the cylinder (or in some models, the blade) turns, the frozen mixture is scraped off the sides of the cylinder and mixed up. 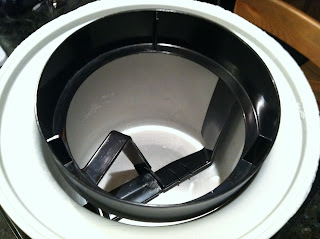 Put the clear plastic cover on the machine and switch it on. Start pouring the mixture in through the hole; do your best to scrape every last bit in there (or plan to enjoy licking the bowl). Set your timer for 20 minutes. 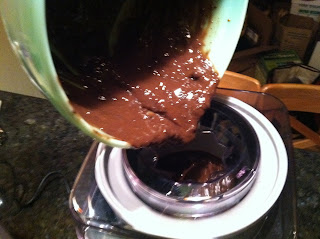 After a few minutes the mixture is still pretty fluid; you can see it sort of churning over the blade: 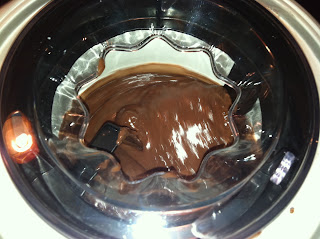 But in no time at all it's frozen enough to be a solid mass in the middle while the cylinder spins freely around it. 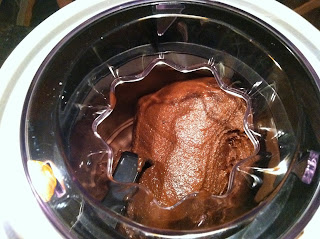 You might need as long as 25 minutes to reach this step, but it will probably be more like 20. If the machine makes a grinding/complaining noise like the engine is working too hard, it's done. Shut the machine off and start scraping the contents into a freezer-safe container. As you'll see, I was able to remove most of the ice cream just by removing the blade and setting it down in a Whatever-ware container: 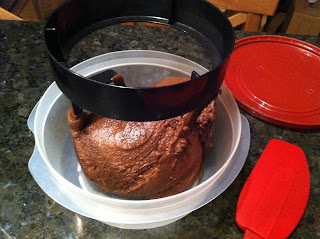 I like to keep a variety of scraping tools on standby to get every last bit of ice cream off the cylinder and the blade. That stubby paddle/spatula/knife thing at the bottom is now my favorite tool for this task. 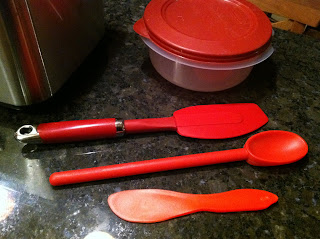 You never want to scrape the cylinder with a metal utensil; it's pretty fragile, and scratches easily. There's usually another cup or so of ice cream stuck fast to it, so scrape it off by whatever means possible: 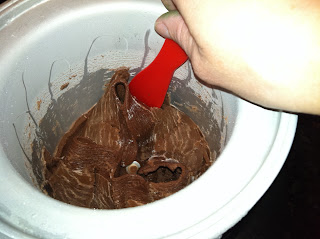 I like serving this stuff up immediately; if you time it right you can be making ice cream while you're having dinner and it will be ready in time for dessert! You can store it in the plastic container until you're ready to use it. If you used 1% milk, it'll freeze really solid and you might need to defrost it in the refrigerator a while before serving it up. I hope you dig it! 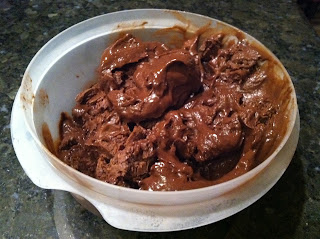