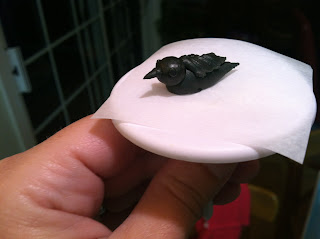 Is there an official bird for the month of October? Because it probably ought to be the very cool, somewhat sinister-looking, crow. All you'll need to pipe a flock of crows (also known, rather poetically, as a murder of crows) are stiff consistency royal icing in black, round tips #12, #8, and #2, petal tip #101, oval tip #57, a flower nail, a Styrofoam block to rest the nail in, parchment paper squares, a glue stick, and a dusting pouch filled with a 50/50 mix of powdered sugar and cornstarch. Start by sticking a parchment square to the nail with a dab from the glue stick. 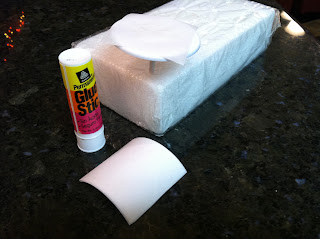 Hold the tip just above and at a 45 degree angle to the surface. Pipe a ball, then move the tip along a short distance before stopping pressure and pulling the tip away to form a teardrop. Allow this shape to firm up for a while. 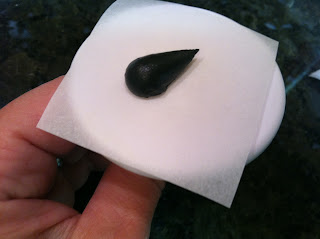 Switch to the #101 petal tip to pipe the wings. Keep the wide end of the tip toward the middle, just over the "spine." While piping out a wing, gently pulse the tip in and out to form a ruffle that suggests feathers. Repeat on the other side. 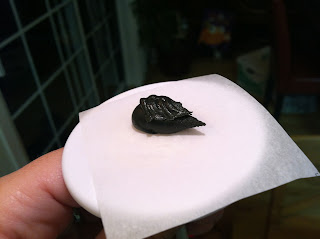 Switch to the #8 tip to pipe the head, which is basically a ball. Touch a fingertip to the dusting pouch and tap down any peak that remains when you pull the tip away. 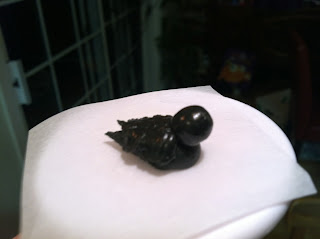 Switch to the #55 tip to pipe the beak. Hold the tip against the surface, squeeze, move the tip away a short distance, then stop pressure and pull the tip away. You may need to taper/elongate the beak with dusted fingertips. Switch to the #2 tip to pipe two dots for eyes, which you should flatten slightly with a dusted fingertip. Place some of these alongside royal icing headstones for an homage to Six Feet Under.