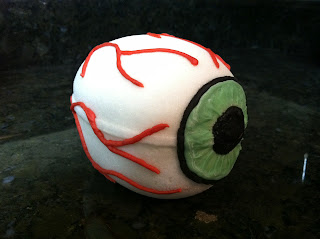 I've always been a big fan of those panoramic eggs you see around Easter; decades ago I made one with my mom and we STILL have it; they'll keep indefinitely if you treat them right, keeping them out of direct sun, heat, dust, moisture, etc. I'm also a big fan of eyeballs, which perhaps regular readers of this blog already know. Before I started blogging, I took a few photos of the process of creating the above panoramic eyeball. There aren't as many photos as I'd like, so I'll try to be as descriptive as possible in my directions. The main thing you'll need is a plastic egg-shaped mold that lies flat (the long way) and opens horizontally. You can usually find these eggs filled with cheap, unappetizing candy for about a month prior to Easter at any drug store. The other tools you'll need are a serrated knife, a spoon, a small cookie sheet, and two mixing bowls (small and large). You'll also need royal icing in white and whatever colors you'd like to do the eyeball details in (such as red for the veins and black and green for the iris and pupil), and a selection of little figures (edible or not) to live inside the eye. To make the sugar mixture, you'll need an egg white, 3 1/2 cups of granulated sugar, and 1/2 cup of powdered sugar. Whisk the egg white in the small mixing bowl until it starts to be frothy. In the large mixing bowl, mix together the powdered and granulated sugars. Pour in the egg white and stir until the consistency is reminiscent of wet sand. Pack it tightly into the two egg halves, level the mixture off with a knife (not serrated) so the surface is perfectly smooth, and set them aside to dry for about an hour. You can speed up this process by placing the eggs on a cookie sheet in a 200 degree oven for increments of 5 or 10 minutes, but I warn you: there's a chance they'll get very hard very fast, and if you're me you'll worry the whole time, perhaps irrationally, that the plastic will melt.

The next step is to scoop out the mixture with a spoon to create hollow shells (scoop it into a plastic bag that you can push most of the air out of and seal tightly, if you'd like to use it to make more eggs). This step is tricky, because you need to make sure the shell has firmed up enough to hold together, but the insides are still soft enough to scoop out. You want the shells to be as thin as possible, but still be thick enough to maintain their integrity. Ideally, they should be the same thickness, so they'll blend together nicely. 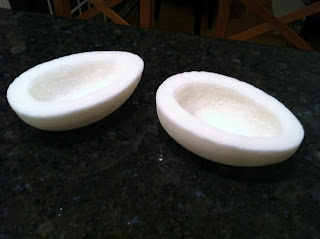 I made mine a bit too solid, I think, because the final product could be lobbed at an intruder's head and I'm pretty sure it would win the battle. When you remove the sugar shells from the plastic mold, hold a piece of cardboard or a cookie sheet flat against the shell and invert the sugar out onto it. 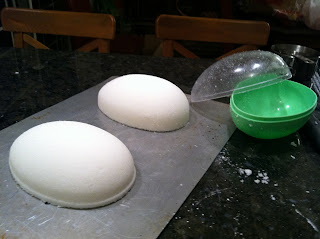 Use a very sharp serrated knife to saw through the narrow end of one half of the egg. The surface of the hardened sugar is slick as glass; be VERY careful. Until now, this has been more or less what you could call a "kids' activity"; NOT this step. If memory serves, I wore an oven mitt on the hand that was holding the egg steady. Place the half you sawed away the end of on top of the other to figure out where your second cut will need to be… 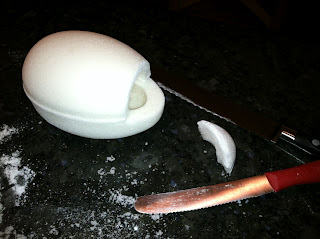 …and repeat the process with the other half. They should match up like this: 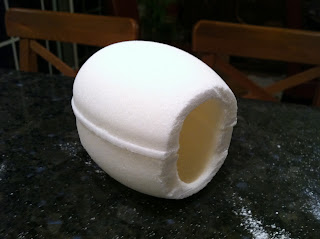 This is one of the most fun steps: arranging a scene inside the egg/eye. I glued in some tiny sugar eyeballs, crows, a headstone, and a pile of skulls (all of which I found at Michael's) with some stiff consistency royal icing. 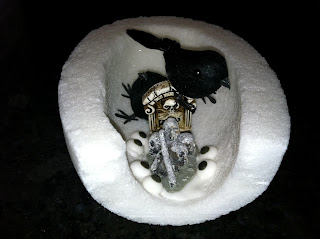 I also glued in an eyeball to be a "moon" on the inside of the other half of the eye, before gluing the two halves together with royal icing. 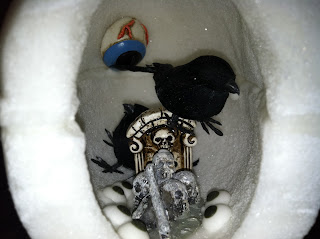 The outside, of course, could be decorated with royal icing. When I made this eye, I hadn't yet learned how to make true red and black royal icing, so I used Duff Goldman's Matte Candy Writers. I would never recommend this product over royal icing, by the way; it never truly felt like it dried 100%. It's a year later, and this eye is in great shape, but I don't think the Candy Writer substance will hold up the way royal icing does. Incidentally, use Super Black and Super Red Soft Gel Paste by AmeriColor for true black and red icing (or fondant or anything else). I started by piping a green circle, then brushing the color in toward the center to create those subtle radial lines of the iris. It took a couple layers to build up to the proper thickness. When it was dry, I piped the black border and the black pupil. 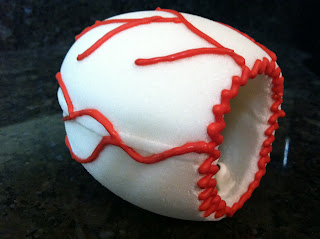 Here's the final eyeball, with a view of its graveyard scene. It lives in a china cabinet, where it can peer out at the world all year long; I just don't have the heart to put it away after Halloween is over. 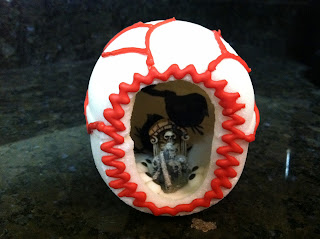