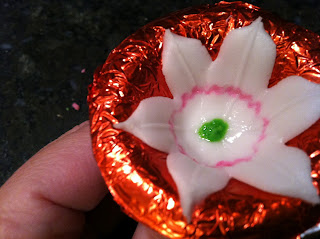 I hate to post a partially-completed project, but thanks to some icing that just will not dry fast enough for me to move on to the final step by midnight, I'll have to make some adjustments tomorrow! The mountain laurel is the official state flower of Connecticut, a designation it has held since 1907 (but it was first noted historically in 1624!). You'll need to line a lily nail with candy foil, the same way as for the jessamine. 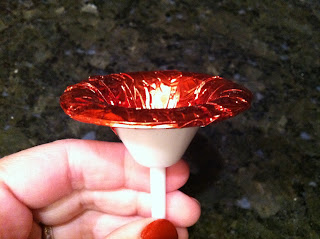 You'll need stiff consistency royal icing in white, green, and pink, leaf tip #70, star tip #16, round tip #3, a dusting pouch filled with a 50/50 blend of cornstarch and powdered sugar, and a food-safe marker like the AmeriColor Gourmet Writer in deep pink. Load the #70 tip on the white icing, place the tip deep into the lily nail, and slowly pipe out a petal, stopping just beyond the curved lip. Stop pressure and pull the tip away. Taper the tip of the petal with fingertips you've touched to the dusting pouch. 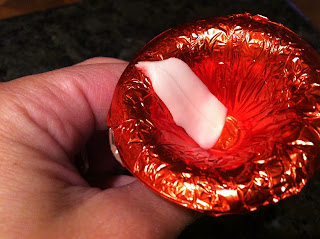 Repeat, slightly overlapping, all the way around the lily nail. 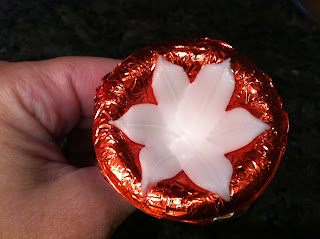 Attach the #16 tip to the green icing, and pipe a small star in the middle. Flatten it slightly with a dusted fingertip. 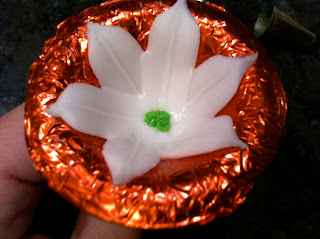 When the icing is firm enough, draw a jagged ring around the inside of the flower with the pink food-safe marker. Tomorrow, when the icing has firmed up further, I'll pipe the white stamens with the #3 tip and tip each one with a #3 dot of pink icing. AND I'll post photos!