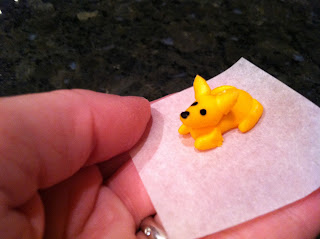 I've never really attempted to pipe a specific breed of animal before, but I'm going to give Queen Elizabeth II's favorite a go: corgis! They're actually fairly minimalist; you don't even need to pipe a tail. You'll need a flower nail, a glue stick, parchment paper squares, a dusting pouch filled with a 50/50 blend of cornstarch and powdered sugar, AmeriColor Soft Gel Paste in Super Black, toothpicks, a Styrofoam block to rest the nail in, round tips #12 and #10, oval tip #57, and corgi-colored stiff consistency royal icing. I used AmeriColor Orange with a small amount of Lemon Yellow to brighten it up. 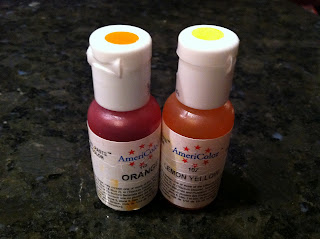 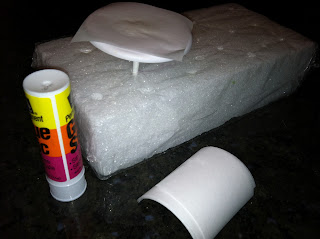 Hold the #12 tip just above and at a 45 degree angle to the surface. Pipe a ball, then move the tip along to form the elongated body. Stop pressure and pull the tip away. 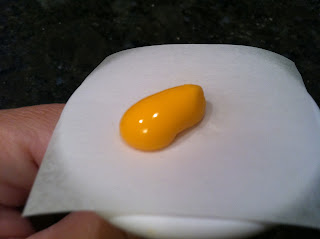 Liberally dust your fingertips by touching them to the dusting pouch, then pinch the narrow end of the body into a tapered, wedge shape for the chest. 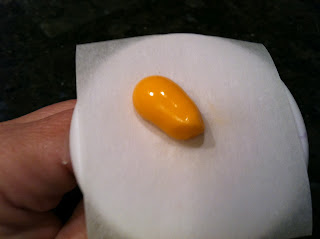 Switch to the oval #57 tip and pipe the legs, which are just 4 short lines of icing. Neaten them with a dusted fingertip if need be. 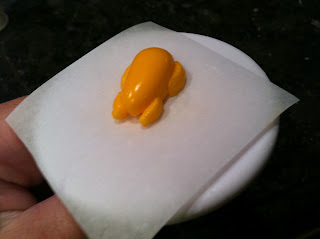 After allowing the body to dry for a while (a process that can be speeded up by placing the bodies under a desk lamp), switch to the #10 tip and pipe the head. It's basically a teardrop. Hold the tip just above and at a 45 degree angle to the body, squeeze out a ball, then move the tip away outward and upward while stopping pressure after a short while. Tap the nose with a fingertip until it's more blunt than pointy. 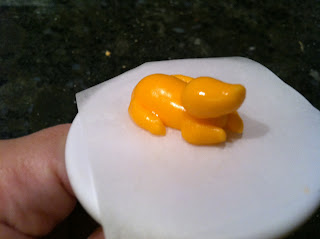 Allow the head to firm up for a while, then pipe the ears with the #57 oval tip. Hold the tip against the head, squeeze briefly, then stop pressure and pull the tip away. Dust your fingertips, flatten then ears slightly, and define the pointed tips if they need it. 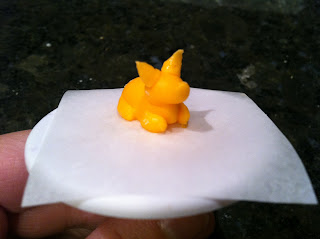 Dip toothpicks in AmeriColor Super Black to create the nose and eyes. I used the small end of a flat toothpick for the nose, and the pointy end of a round toothpick to gently dab in the eyes.

You should probably make a lot of corgis at once; I read that Queen Elizabeth has 16 of them, so they must do well in packs. 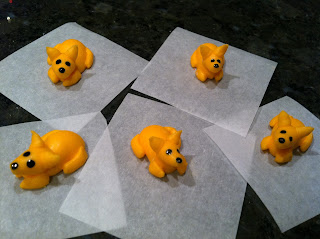