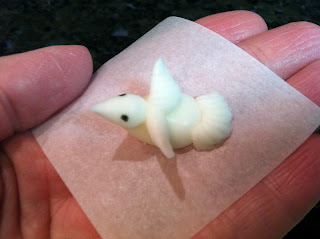 As amazing as the 2012 Olympic Closing Ceremony is (I'm watching it as I type this), I can't get the amazing images of the Opening Ceremony out of my head, namely the doves riding bicycles (dove releases have been a part of the Opening Ceremony since the end of World War I). I don't dare try to pipe a bicycle, but I can attempt a dove. You'll need stiff consistency white royal icing, parchment paper squares, a glue stick, a flower nail, a Styrofoam block to rest the nail in, a dusting pouch filled with a 50/50 mix of cornstarch and powdered sugar, round tips #12 and #8, petal tip #101, and a black AmeriColor Gourmet Writer. Start by sticking a parchment square to the nail with a dab from the glue stick. 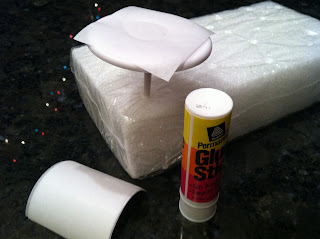 Hold the tip #12 at a 45 degree angle to and just above the surface. Squeeze out a ball to anchor the icing, then move the tip away and upwards for about half an inch. Stop pressure and pull the tip away. Touch your fingertips to the dusting pouch to neaten the end of the upturned shape if you need to. 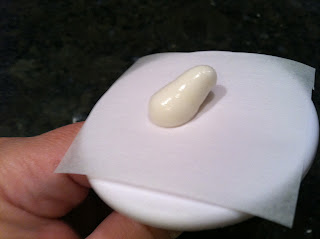 Switch to the #101 petal tip and pipe the tail. Hold the tip diagonally, with the narrow end facing outward. Jiggle the tip in and out in a gentle sawing motion to form the "tail feathers." 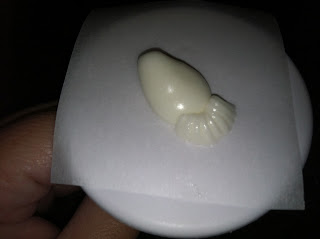 When the body has firmed up a bit, pipe the wings. Hold the petal tip flat against the body, and squeeze while pulsing the tip in and out to build the icing up enough to support the wings and stand them up. When the wings are about half an inch long, stop pressure and pull the tip away. Neaten the wing tips with dusted fingertips into points. 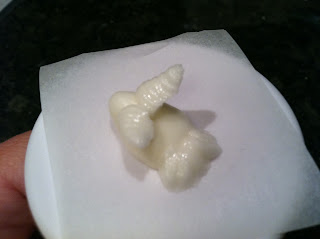 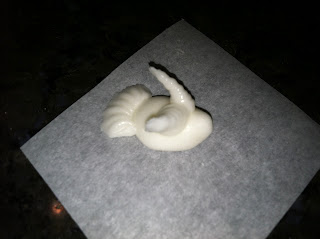 Switch to the round #8 tip to pipe the head. Hold the tip against the body, squeeze out a ball, then pull the tip away and stop pressure. A peak should remain, which will be the dove's beak. 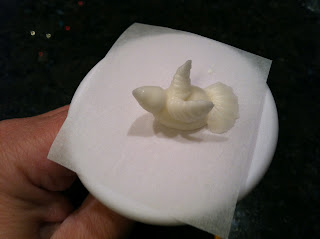 After the head has firmed up, add dots for eyes with a food-safe marker like an AmeriColor Gourmet Writer. Not a bad generic little bird; you could pipe it in any color if you wanted something more vibrant than doves!