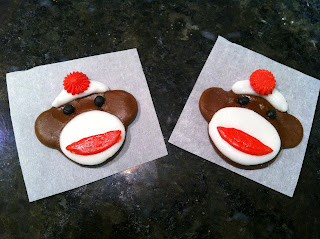 I was looking at some weird little sock monkey craft my daughter brought home from school, and all I could think of was "Royal icing. I got this." All you need to pipe goofy little sock monkey faces is stiff consistency royal icing in brown, white, black and red, round tips #12, #3, and #2, oval tip #55, and star tip #199. You'll also need a flower nail, a Styrofoam block to rest the nail in, a glue stick, parchment paper squares, and a dusting pouch filled with a 50/50 mix of powdered sugar and cornstarch. Start by sticking a parchment square to the flower nail with a dab from the glue stick. 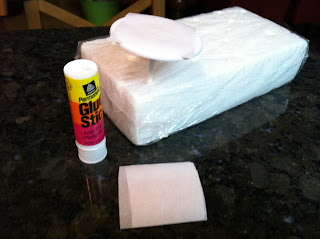 Attach the #12 tip to the brown icing. Hold it at a right angle and just above the surface. Squeeze steadily while piping an oval, then fill it in, then pipe a circle on either side. 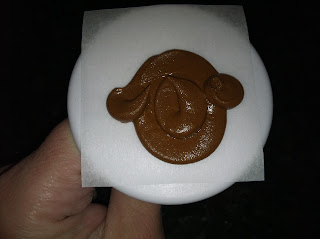 Touch a fingertip to the dusting pouch and tap the icing flat. Believe it or not, the pile of icing above will become the shape below. Allow it to dry for a few minutes. 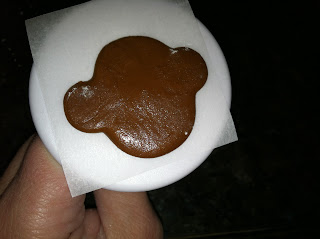 Also using the #12 tip, pipe an oval for the face. Fill it in, and tap it flat, just like the shape above. 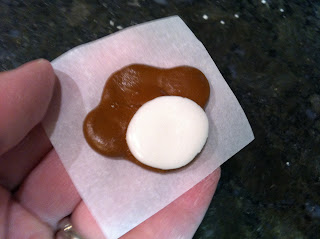 I used an oval #55 tip to pipe the hat, but you could probably be quite successful with any small, round tip. 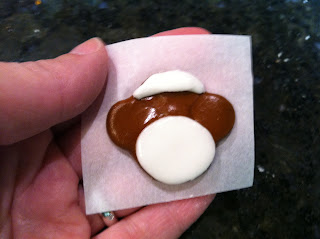 Pipe the eyes with the #3 tip; they should look like little buttons. Pipe down any peaks that form when you pull away the tip with a fingertip you've touched to the dusting pouch. 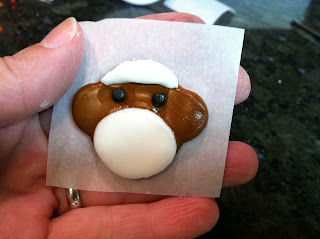 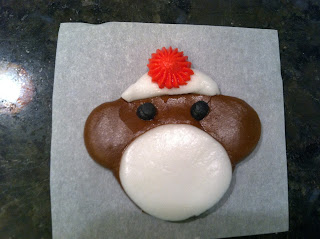 …then switch to a small tip like the #2 to pipe the mouth. I'm not sure this was the best tip to use, but it's easier to manipulate than a tip like the oval #55. When the icing is dry I'll draw in a couple of nostrils with a food-safe marker and post another pic!