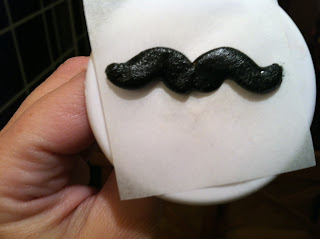 Today's post is a tribute to all the guys growing mustaches in November to commemorate Movember, an annual, international effort to raise awareness of prostate cancer. This post is also, of course, a tribute to all the guys having to deal firsthand with this dreadful disease. I swear, once this tiny icing mustache is dry enough tp peel off the parchment, I'll post a shot of me with it stuck to my face. All you'll need to pipe iconic handlebar mustaches to decorate cupcakes, brownies, cake pops, whatever, for Movember are stiff consistency royal icing in any color (but black is particularly fetching), a round #10 tip, a flower nail, parchment paper squares, a Styrofoam block to rest the nail in, a glue sick, and a dusting pouch filled with a 50/50 mix of cornstarch and powdered sugar. Start by sticking a parchment square to the flower nail with a dab from the glue stick. 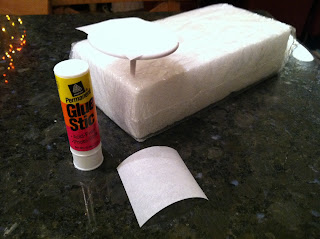 Hold the tip just above and at a right angle to the surface. Squeeze while moving the tip in an S shape. Increase pressure during the first curve, and decrease pressure as you continue through the second curve. 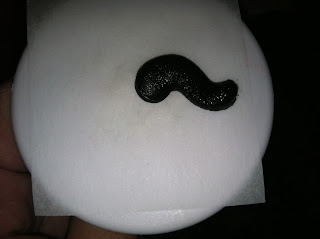 I found it easier to make the sides even by piping the other side upside down. Rotate the nail, and pipe the other half. Overlap the second half slightly, and gently tap down the center with a fingertip after touching it to the dusting pouch. You could probably stick a toothpick into the icing when it's wet to serve as a handle or cupcake pick (I haven't actually tried this myself, but there's really no reason it wouldn't work if it's properly embedded and the icing is allowed to dry completely).