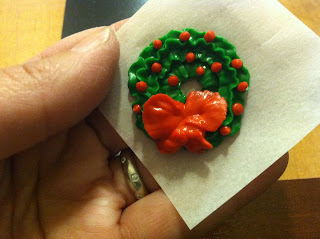 I've had tip #71 by Magic Tip in my possession for months, but I've never used it. I was never really sure what the point of it was; it's basically a star tip that looks like it's been stepped on (it's flat on one side). As I was pondering which tip to use to pipe a Christmas wreath, I gave that one a try and I think it worked quite well. You'll also need a small round tip like the #2 to pipe berries, and a tip to pipe the bow; I used the petal tip #101. You'll also need a flower nail, a Styrofoam block to rest the nail in, parchment paper squares, a glue stick, and a dusting pouch filled with a 50/50 mix of powdered sugar and cornstarch. Start by sticking a parchment square to the flower nail with a dab from the glue stick. 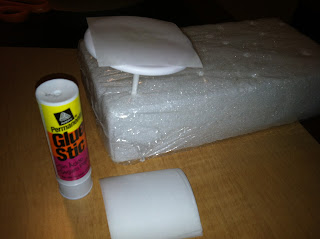 Hold the tip, flat side down, against the surface, and rotate the nail more slowly than you pipe; your pressure should be fairly firm. This is what will cause ruffles to form. When you reach the point where the two ends meet, overlap the ends a little, stop pressure and pull the tip away. You might neaten up this area with a fingertip after touching it to the dusting pouch. 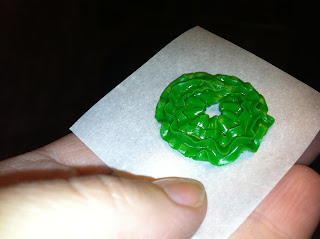 If you're going to pipe a bow, do it over the junction of the two ends. I piped the two loops of the bow first, with the wide end of the tip in the middle and the narrow end angled outwards. Move your hand in a tight "C" motion while piping for each side. 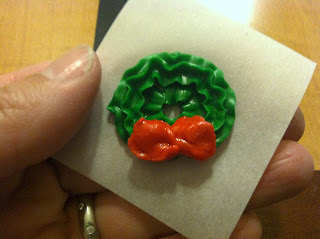 The tails of the bow are just short squirts of icing; there's no real direction for them. 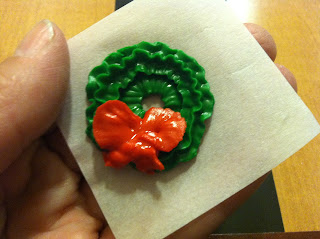 Switch to the #2 tip and pipe berries, which are nothing more than dots of icing. Pipe all the dots, then tap down any peaks with a dusted fingertip. The wreath would be perfect on a Christmas cupcake, but it would really look great on the door of a gingerbread house!