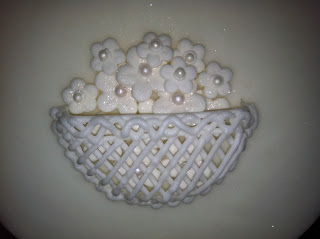 I received the phenomenal 2010 book "The Art of Royal Icing" by Eddie Spence for my birthday. If I were to attempt all the projects in it, this blog would be like Julie & Julia all over again (and nobody wants that). His projects run the gamut from relatively simple blooms piped on a flower nail to a freestanding royal icing gazebo, so I thought I'd attempt something in the middle and toward the easier end: royal icing baskets (what with Easter being on the way and all). The setup for this project is simple…and baffling. I'd always heard the warnings of "royal icing and grease don't mix," "make sure all your utensils are grease-free," "grease will cause royal icing to 'break down'", etc. So when the brilliant Eddie Spence starts his instructions with "Grease the underside of the tin/container with white vegetable fat" I thought the man must have had a little too much cake with his wine. I considered attempting this project sans Crisco, but decided against it; Eddie bleeds royal icing, and must know what he's talking about. So, to make royal icing baskets, here's all you'll need: Crisco, a muffin pan, and a piping bag full of stiff-consistency royal icing, fitted with a round #2 tip. 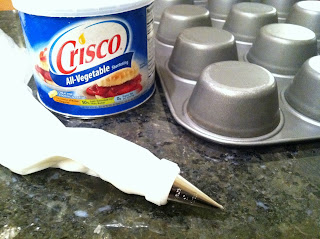 Start by greasing the underside of the muffin pan with Crisco. Use the tiniest amount you can imagine: 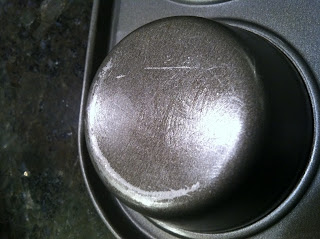 I made a couple of dots to give myself a permanent reminder of the middle of the cup. The first line is basically a drop string, which I haven't blogged about yet (I'm going to need to post a video to properly demonstrate them). Essentially, you'll need to pick up the muffin pan, squeeze a dot as a sort of anchor on one side of the cup, and then continue squeezing as you move the tip around the cup; the icing won't be touching the cup until you reach the other side, when you rein it in by touching and anchoring the tip to the opposite side of the cup from where you started. Alternately, I suppose you could just pipe a curved line along the cup, but I wouldn't have trusted my oft-shaking hands to get that first line as straight as with the drop string method. This line won't matter too much, by the way, as it'll be covered in all sorts of other elements shortly. 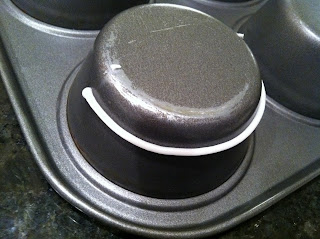 In between each step I allowed a few minutes to pass so the icing could firm up a bit (a process that can be sped up by having a heat-producing desk lamp handy). The next step is to pipe a couple of cross-pieces: 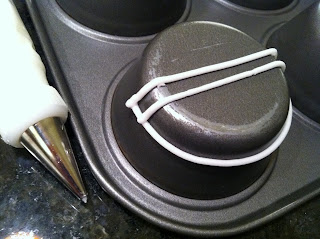 I kept my dusting pouch (filled with a 50/50 mix of powdered sugar and cornstarch) handy so I could touch my finger to it and tap down any points that formed at the end of each piped line. The next step is to pipe the latticework. Start in the middle and work your way in one direction or another, piping diagonal lines that connect the lower cross-piece and the curved line at the bottom. The lines should be evenly spaced, about the width of the tip #2. 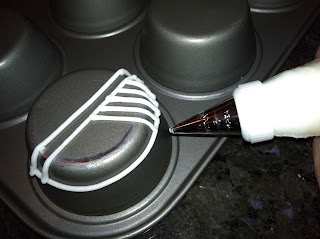 After allowing the first set of diagonal lines to firm up for a few minutes, the second set in the opposite direction gets piped, again starting from the middle: 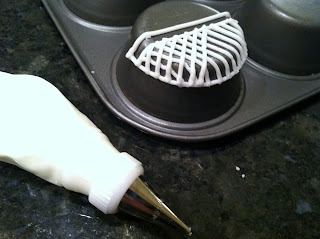 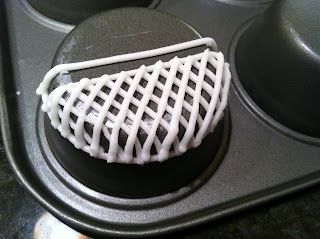 The next steps are all about strengthening the structure. First you'll want to do something with the top cross-pieces; you could pipe leaves, lines, dots, whatever. I piped a wavy line first in one direction, then the other: 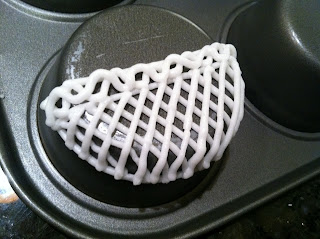 Finally, pipe a border along the bottom; this border is known as a running bead. 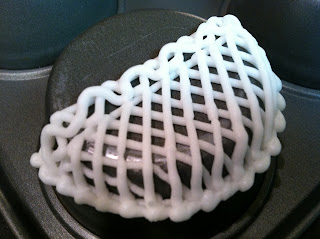 I allowed it to dry for about 10 hours, confident the whole time that everything I'd ever heard about royal icing and grease would cause an enormous meltdown. When I gently nudged the underside (near the border) with my thumbnail, the basket popped off effortlessly, thus dashing all the lies and propaganda I'd ever been fed on the subject of Crisco. Here's the basket's underside: 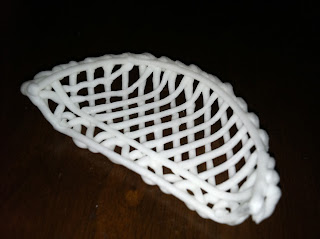 And here it is in a potential final position, filled with a bouquet of blossoms (all attached with royal icing). A handle, leaves, or further decoration could be piped once the basket is firmly attached to the side or top of a cake. Imagine all the other containers royal icing baskets could be piped on! I'm planning to do a bowl of some sort to use as a cake topper in the near future (possibly using a small basketweave tip).

Posted by Denise Delaney at 4:13 PM