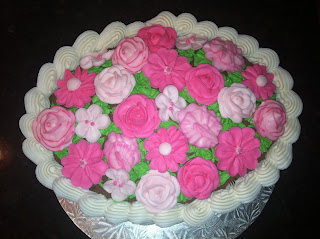 Shell borders are common as dirt in cake decorating; go into any Safeway or Costco and you'll see shelves of cakes bearing them. However, 90% of the time they look like they've been mashed out of a toothpaste tube, and 100% of the time they're made of a substance that claims to be frosting contained in a 1-gallon drum (OK, I'm guessing on that last part; maybe it's a 5-gallon drum). Anyway, there's not a lot to piping a shell border that actually looks like shells, but there's a bit of technique to it. For starters, it's helpful to pipe onto a frosted cake that's been chilled. If you pipe onto soft, room-temperature icing, it could possibly get caught up in the motion of the shell border (especially in the case of this basketweave cake I'm demonstrating on). You can pipe a shell border with any star tip. I attempted to match the size of the grooves in the basketweave with the size of the grooves in the star tip I'm piping the shell border with, so the border doesn't look like some sort of unassociated appendage (I used Magic Tip's #195 for the shell border and #2B for the basketweave). Load a pastry bag with a large amount of medium consistency icing (I used Wilton's Ready-To-Use Decorator Icing). Starting at wherever you've determined the back of the cake to be, hold the end of the tip just above the surface at a 45 degree angle… 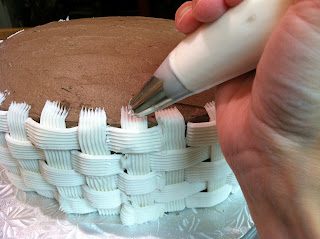 …and pipe the letter J. There's just no other way I can explain it. Imagine the letter J rolled to the left, and then flipped around so the curved end is to the left and the straight end is coming from the piping bag (unless you're left handed; then just imagine the letter J rolled to the left). When you're piping these J's, you'll squeeze the hardest at the curved part, decrease the pressure as you move into the straight part, and stop pressure all together as you come to the end and pull the tip away. If you really want to be thorough, wipe the tip clean every few shells as needed. 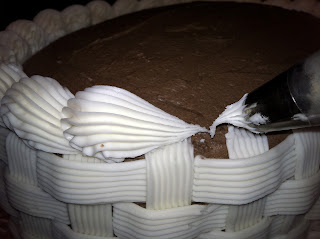 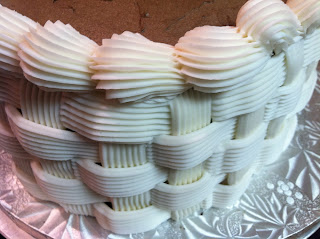 And here's the end of the line. Do your best to taper the tail of the final shell into the first one; I've never managed to do it cleanly. As long as it's at the back of the cake, it's never worried me much! 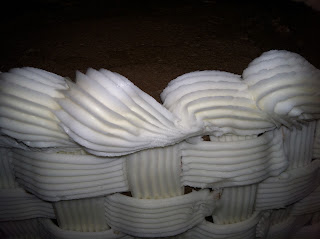 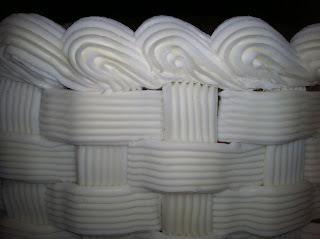