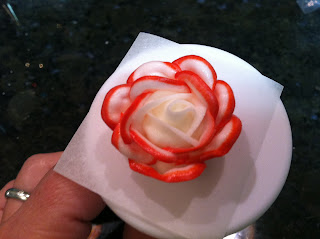 Continuing with projects inspired by the London Olympics, today's post is the Tudor Rose. This is a motif commonly seen in heraldry, but there is an actual version that grows in the dirt, too, which is the one I'm attempting to replicate. All you'll need to pipe this red-and-white rose are stiff consistency royal icing in white and red (I recommend Super Red by AmeriColor to color your icing a true red), a cheap brush from the craft store, a dusting pouch filled with a 50/50 mix of powdered sugar and cornstarch, parchment paper squares, a flower nail, a glue stick, a Styrofoam block to rest the nail in, round tip #12, and tip #97, which is used to pipe Victorian roses. That's a tip #97 on the left; on the right is a standard petal tip #104 (teardrop shaped) 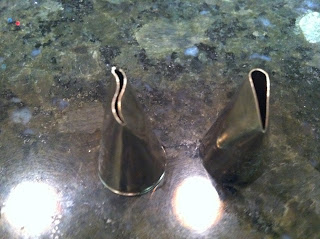 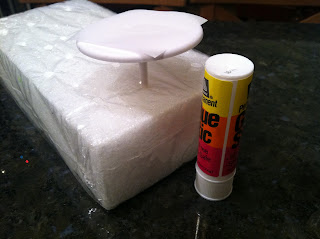 Pipe a base for each rose, and allow the bases to firm up. The bases are basically shaped like Hershey's Kisses, and are made by holding the round tip #12 perpendicular to and just above the surface, squeezing until the icing is the size of about a nickel, and slowly moving the tip upward and away from the surface before stopping pressure and pulling the tip straight up and away. 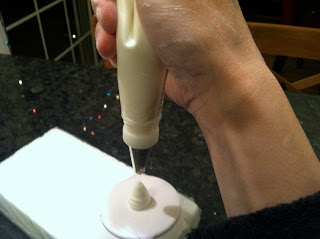 Remember how important it is to allow the bases to firm up; you don't want them to flatten out under the weight of all those petals. Warning: graphic photos of icing gone wrong here. 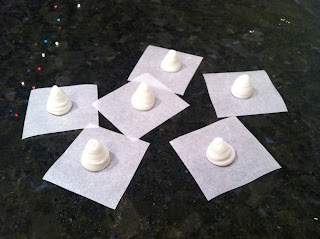 Work on each rose one at a time by returning them to the flower nail with a dab from the glue stick. Handle them only by the parchment paper. Start by piping the center petal that wraps around the tip of the base with the tip #97. You can read all of the specifics regarding angle, pressure, distance of each row of petals to the next, number of petals, etc. if you go to the Wilton site and read about The Wilton Rose. 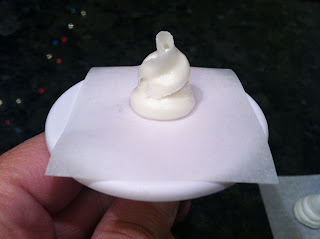 The main difference in using the tip #97 is the petals will curl over at the edges a little, which I think makes them look so much more realistic than the standard petal tip. Start by piping three overlapping petals around the center wraparound petal. 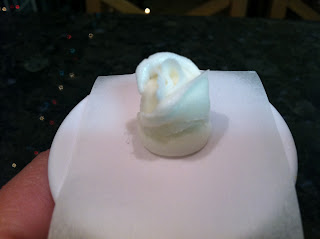 Then, you'll want to make a striped bag. Paint a generous stripe of red icing for a couple of inches along one of the bag's seams and all the way into the coupler, if you're using one. 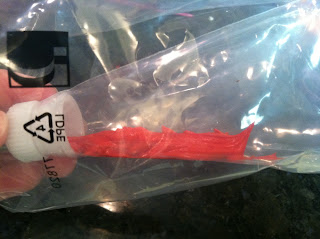 Fill the bag as much as you'd like with white icing… 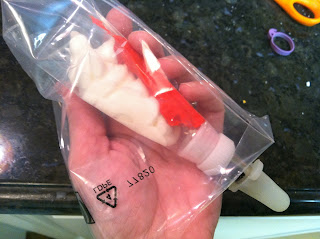 …and make sure the narrow side of the tip is lined up with the stripe. 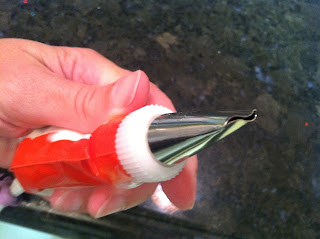 Pipe a row of 5 overlapping petals, angling them slightly more outwards than the row of 3 petals… 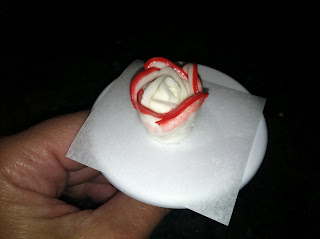 …and finish with a row of 7 or more overlapping petals, angling outwards even further (but not lying flat on the parchment; there should still be plenty of clearance between the flower and the paper). How pretty would these be on red velvet cake? But not very British, I'm afraid.