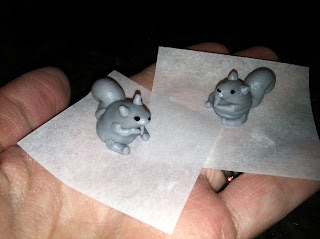 The gray squirrel is the official Wild Game Animal of the state of Kentucky. Are these things actually a delicacy? I'm no stranger to chipping a tooth on a piece of shot, but it's hard for me to think of these birdfeeder thieves and "game" in the same sentence. Guess I'll have to give them a try…or not. Anyway, to pipe teeny, tiny squirrels that can sit comfortably on a nickel, you'll need stiff consistency gray royal icing, round tips #2, #10, and #12, a flower nail, a Styrofoam block to rest the nail in, a glue stick, parchment paper squares, Super Black soft gel paste by AmeriColor, round toothpicks, and a dusting pouch filled with a 50/50 mix of cornstarch and powdered sugar. Start by sticking a parchment square to the nail with a dab from the glue stick. 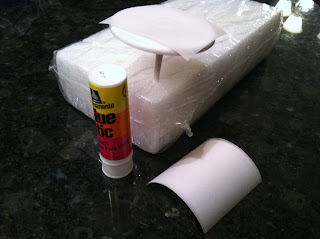 Pipe the shape that will be the body and head with the #12 tip. Hold it flat against the surface, squeeze, and pull the tip up slowly and then off to the side. Stop pressure and pull the tip away. Touch your fingertips to the dusting pouch and tap the shape until it roughly resembles this one: 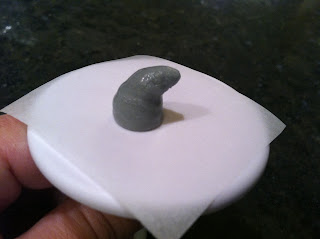 Allow it to firm up for a few minutes, then switch to the #10 tip to pipe the tail. Hold the tip close to the base of the squirrel's, um, posterior, and squeeze while moving the tip up the squirrel's back. When you get to the part where the squirrel's body bends over and tapers into the head, move the tip away while still piping. Stop pressure and pull the tip away after about 1/4". 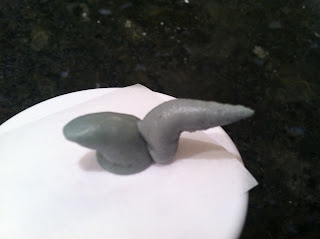 Touch your fingertips to the dusting pouch and adjust the tail downwards, so it looks like an upside-down "U." 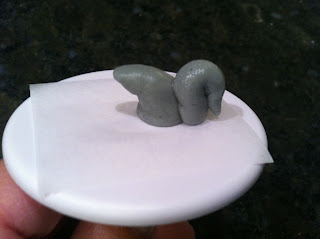 Switch to the #3 tip and pipe the ears. They're nothing more than just tiny dabs of icing; adjust them with a dusted fingertip. 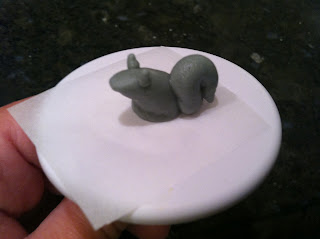 Use the #3 tip to pipe the legs, as well. Start with the hind legs. Tap these short shots of icing gently with a dusted fingertip to firmly adhere them to the body. 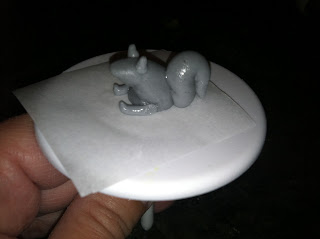 When you pipe the front legs, tap the little "paws" so they touch. When they're dry, you could pipe a tiny brown icing "nut" with a #2 tip if you wanted to. 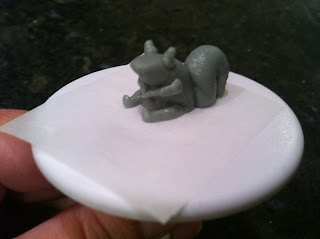 When the squirrel's head is dry, paint in the eyes with a toothpick dipped in a product like Super Black soft gel paste by AmeriColor. Squirrels' eyes are more oval than round, so try to smash the tip of the toothpick into more of an oblong shape (or just dab two tiny circles very close together to make one eye and sort of blur them together with the toothpick). The nose is a tiny "v" shape. Park these squirrels on a cupcake alongside some royal icing acorns; they'll go nuts!