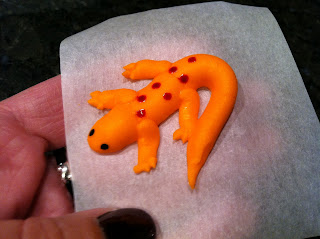 Tonight's post is a first for me: an official state amphibian! New Hampshire bestowed the adorable spotted newt with this lofty title in 1985 after a two-year effort by high school students. I love stories like that! The spotted newt is a bit on the minimalist side and already sort of looks like it's been piped out of icing, so it's a pretty easy critter to create. You'll need orange stiff consistency royal icing, AmeriColor Soft Gel Paste in Super Black and Super Red, round toothpicks, a glue stick, a 3" flower nail and 3" parchment paper squares, a Styrofoam block to rest the nail in, round tips #12 and #3, oval tip #57, and a dusting pouch filled with a 50/50 mix of powdered sugar and cornstarch. Start by sticking a parchment square to the flower nail with a dab from the glue stick. 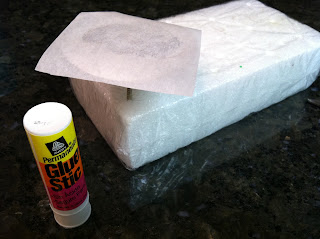 Attach the #12 tip to the bag of orange icing. Squeeze some out, then swipe your finger across the tip to flatten the end. 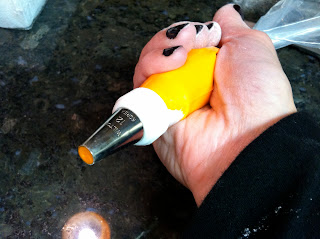 Dust your fingertips by touching them to the dusting pouch. Squeeze out about 1/3" of icing, and tap it gently into an oval shape. This will be the head. 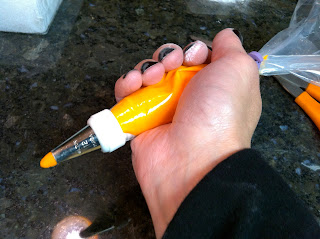 Hold the tip with the head close to one edge of the parchment with the bag lying almost flat against the surface. Squeeze out the head, body, and tail. It's up to you how much of a curve you want in the shape, or if you want the end result to be more of an "S." One thing I had to do that's different than a real newt is make the tail thicker; the newt's tail is very thin, and if it was piped that way would surely break. 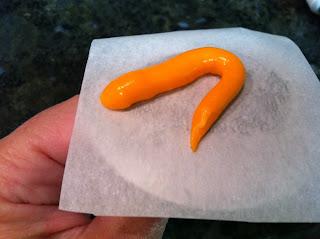 Switch to the oval #57 tip to pipe the four legs. Hold the tip against the body, squeeze for slightly less than 1/2", stop pressure, and pull the tip away. 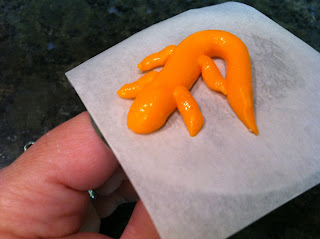 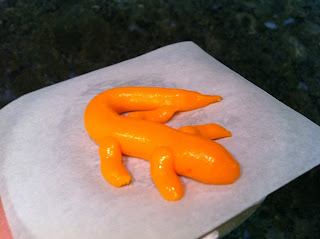 Switch to the #3 tip to pipe the toes. They're nothing more than very brief little dabs of icing, as you can see. 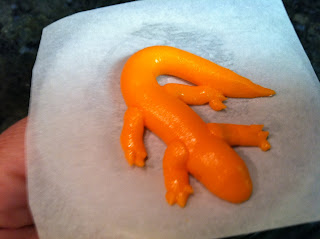 After the icing has firmed up, get ready to do some painting. Smash the point of a round toothpick against a hard surface (like the counter) so it will be more oval. Dip it in the black soft gel paste and dab on the eyes. 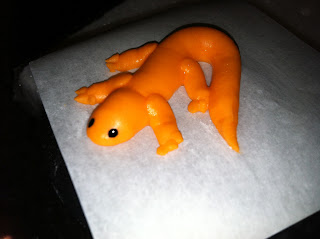 Use the pointy end of a toothpick to dab on two rows of randomly scattered dots. When the icing is dry, peel away the parchment. You could turn this newt into all sorts of different amphibians just by changing the colors!