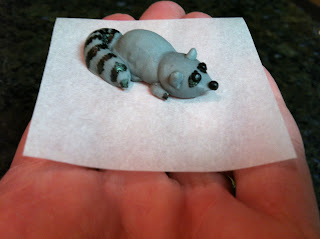 If you've made an excessively large batch of gray icing and are trying to think of ways to get rid of it, look no further than the official state wild animal of Tennessee, the raccoon (also the official garbage-eating pest of my backyard). To pipe raccoons you'll need stiff consistency royal icing in gray and black, parchment paper squares, a flower nail, a glue stick, a Styrofoam brick to rest the nail in, a black food-safe marker like the AmeriColor Gourmet Writer, round tips #12, #10, and #2, oval tip #55, and a dusting pouch filled with a 50/50 mix of powdered sugar and cornstarch. Start by sticking a parchment square to the flower nail with a dab from the glue stick. 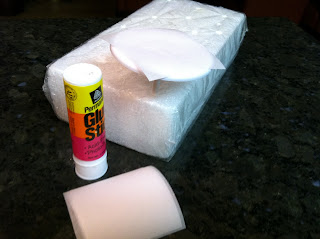 Attach the #12 tip to the bag of gray icing. Hold it at a 45 degree angle to and just above the surface. Pipe until a ball forms, then move the tip along for about half an inch. Stop pressure and pull the tip away. 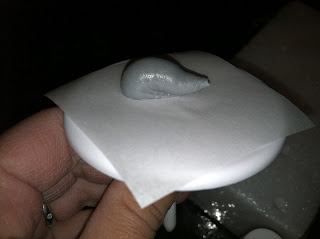 Touch a fingertip to the dusting pouch and gently tap the peak to blunt it. 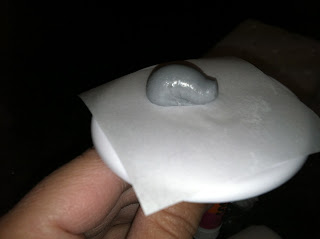 Switch to the #55 tip and pipe four short legs, tucked in against the body and extending slightly out in front. 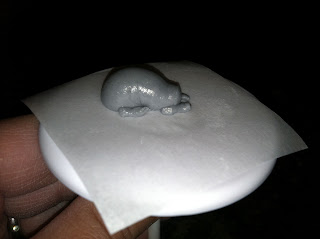 Switch to the #10 tip to pipe the tail. Hold the tip flat alongside the surface of the nail and just a millimeter or so away from the body. Squeeze, then rotate the nail while piping so the tail is snug against the body. Stop pressure and pull the tip away, leaving the peak. 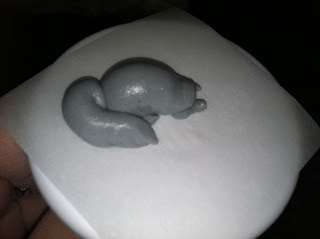 Here's another view. You could pipe it so the tail is straight, but appendages like that always worry me because they're more likely to break off. 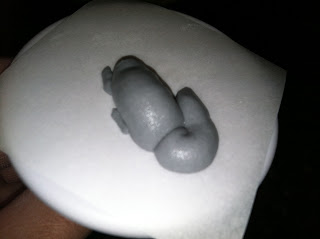 Also use the #10 tip to pipe the head. Hold the tip close to the surface, squeeze out a ball, then pull the tip away while stopping pressure. 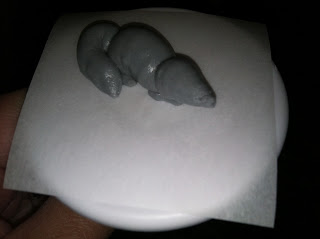 Dust your fingertips by touching them to the dusting pouch, then gently pinch the head into more of a wedge shape. 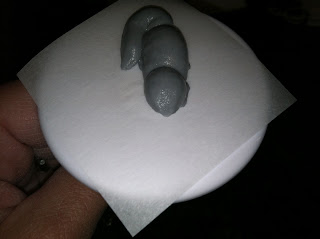 Here's a side view: 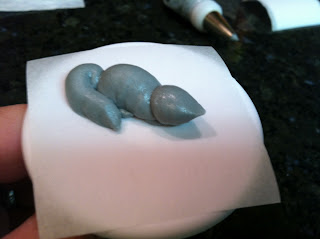 Switch to the #55 tip to pipe the ears. I also had to re-pipe the legs, which had gotten buried as the icing settled (we're having an especially foggy night here; not the best climate for piping with royal icing). 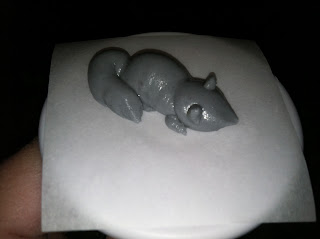 Allow the icing to dry for about 15 minutes, and then move on to the marker. Start by dabbing in the rings on the tail… 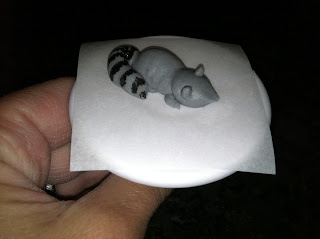 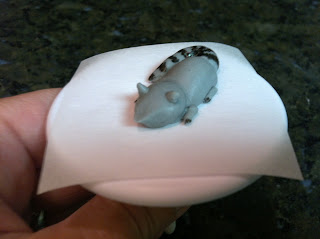 …and some rounded diamonds for the mask. 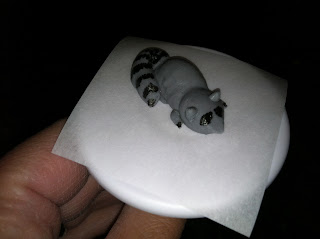 Lastly, use the #2 tip to pipe a dot for the nose and two dots for the eyes. If only raccoons were this size, I wouldn't worry every time they show up that they're going to have their way with my cat.