Thinking outside the box (mix) 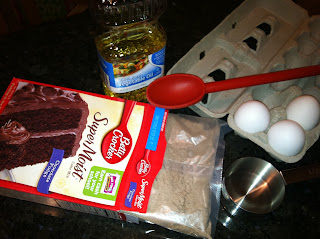 I don't get why box mixes get such a bad rap. For me they represent endless nostalgia, are affordable even when I'm feeling cash poor, are a perfect vehicle for huge amounts of frosting, and usually result in folks asking for my recipe. I'd rather make other things from scratch that taste like a chemistry experiment out of the box (like fondant; that'll be a whole other post).

There's little I can tell you about box mixes that you can't just figure out from following the directions, but I've learned a trick or two that can make the end result a little more slick. If you're making a round cake (always a classic), start with two identical pans, either 8"or 9" (I prefer 8"; that extra bit of height is really appealing). Grease your pans with a healthy smear of butter from a wad of waxed paper, followed by a dusting of flour: 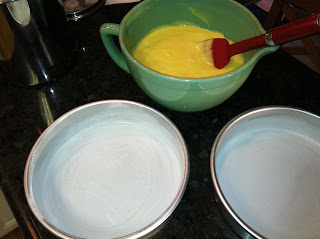 Then lay down a circle of parchment paper before pouring in the batter (parchment circles are discussed in yesterday's post). Note that I'm using a batter bowl with a spout; I LOVE these. You can probably eyeball pretty accurately the evenness of your batter distribution, but I leave nothing to chance. I haven't invested in a kitchen scale yet, so I snag the one out of our office: 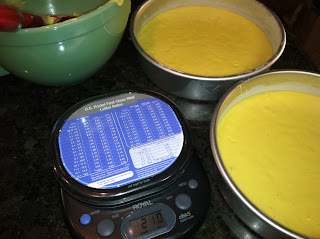 Would you believe I actually got them both to weigh 21 ounces on the first try? That's only ever happened once before; I was stunned when the number came up on the second pan. Not much to do now but bake them, side by side around the middle of your oven. All these mixes that claim to be "super moist" or whatever don't really work with the toothpick test; there will always be crumbs clinging to the toothpick unless the cakes have been incinerated. Listening to the cakes for that rapid damp sizzling noise (like a dishpan full of suds or a bubble bath) provides just as accurate of an indication that it's time to pull the cakes out; when that noise is almost nonexistent, they're done. Alternately, when you can gently pat them and they spring back enthusiastically, they're done. 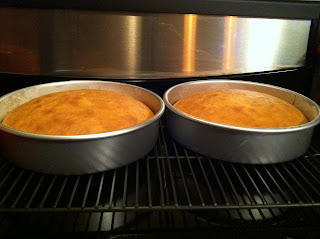 If you read yesterday's post, you already know about leveling cakes (removing the dome-shaped "crown" using a serrated knife and a cake lifter)… 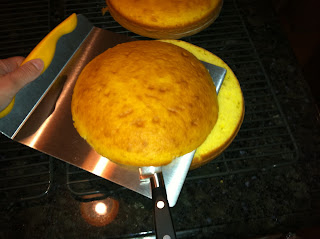 …now I'll show you the similar process of torting cakes; this is how you'll turn a 2-layer cake into a 4-layer cake. After the cakes have cooled on their racks (a process you can hasten by sticking them in the fridge for half an hour or more), get down to eye-level with them and start sawing them gently across horizontally. 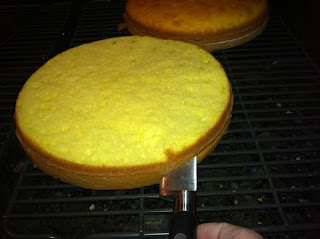 You may find it's easier to do this from several different angles, rather than straight across in one go. As long as all the entry and exit wounds connect (as it were), you should be able to lift the top layer off either with your own two hands or with the aid of a cake lifter, leaving you with 4 relatively even layers: 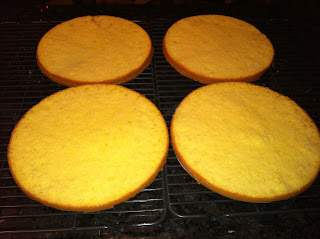 Now comes the fun; stacking and filling them. I'm going to go into detail on those steps tomorrow because I'm dying to watch Cake Boss: Next Great Baker! I'll leave you with this, though; it took me FOUR cans of frosting to properly fill, ice, and decorate this cake (3.5 cans of lemon frosting and half a can of decorator's icing). You can see how a 15 ounce box of cake mix can turn into a cake that weighs several pounds!
Posted by Denise Delaney at 9:01 PM