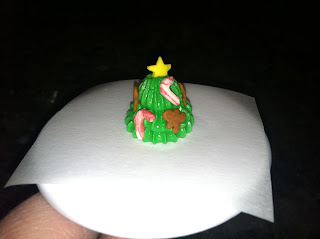 I'll admit, yesterday's royal icing Christmas tree turned out better than today's, but I thought I'd show you this other "tiered" variation that was inspired by one of my daughter's bath toys: 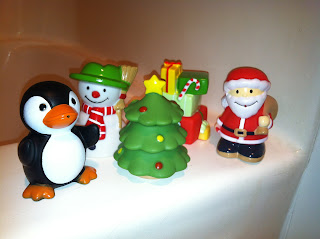 I also found a few more cookie decorations that I thought might work well as ornaments. Here they are on the countertop, to give you an idea of how small they are (my hands aren't particularly large). 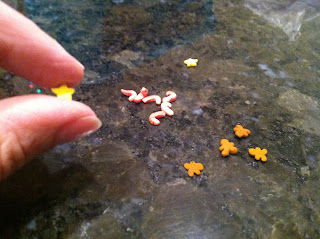 In addition to tiny decorations, you'll need a #199 star tip, stiff consistency green royal icing, a flower nail, parchment paper squares, a glue stick, and a Styrofoam block to rest the nail in. Start by sticking a parchment square to the flower nail with a dab from the glue stick. 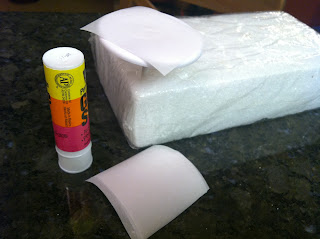 Hold the tip just above and at a right angle to the surface. Squeeze out a small amount of icing until the tip is buried in it, then stop pressure and draw the tip up a couple of millimeters. Repeat. When you've reached the third tier, stop pressure and pull the tip away straight up. 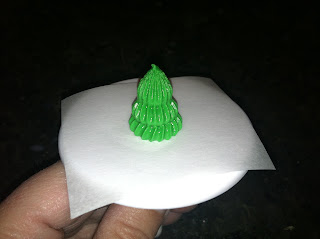 You can decorate it in any way you like before the icing firms up, like with a tiny star on top… 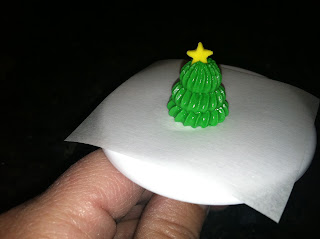 …and miniature candy canes and gingerbread men for ornaments (I'm pretty sure I found these Dean Jacob's sprinkles at a cake decorating store).